Riz (Thapa) is an illegal Indian immigrant, fresh off the boat, who has just started a job as a housekeeper at the highly questionable Tides Plaza Motel in Poughkeepsie. It’s owned and operated by another immigrant, the East European Una (Nixon), but there’s no fellow feeling or camaraderie between them – virtually the first thing Una does after departing from her new employee, is to shred her passport. She put Riz in with another maid, Dallas (DeJonge), who dreams of escaping Poughkeepsie and opening a nail salon. 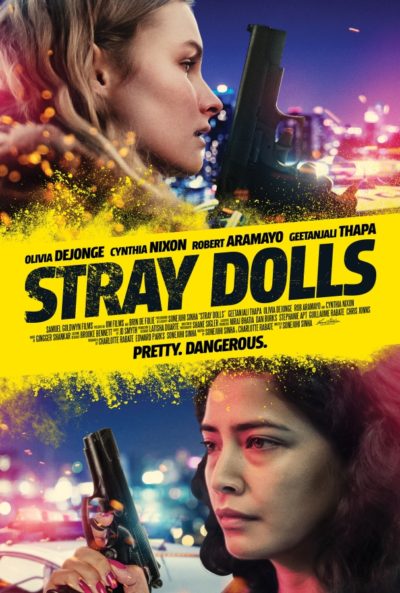 These ambitions are only prevented by… well, pretty much everything, including Dallas’s drug habit and skeezy boyfriend, Jimmy (Aramayo), who is also Una’s son. The first thing Dallas does to her new roommate is rob her at knife-point. Yet, inevitably, the two bond, even it’s a friendship largely dependent on the package of coke Riz – who has a dubious past of her own, back in India – steals from a motel resident while cleaning his room. He’s not happy about it, but even after our pair of juvenile delinquents handle that particular issue, it only brings about the arrival of their victim’s boss.

Outside of Riz, the characters are largely well-worn cliches in search of a worthwhile storyline, and that only shows up in spurts, being similarly hampered by too much reliance on overly familiar tropes. For instance, we just know Riz and Dallas are going to turn to Jimmy to sell the drugs, and he is going to stiff them. The pleasures here are to be found in the wrinkles and around the edges, such as Una’s fondness for karaoke. Though even this seems almost like an excuse to lob, Tarantino-like, anachronistic tunes onto the soundtrack, and I’m not sure it works. Indeed, to a certain extent, this feels like a low-rent version of True Romance, without much romance, and lobbing in elements of Scarface.

The same goes for the stabs at social commentary, which sometimes come off as clumsy, i.e. shoehorning in footage of a Trump campaign speech. Though if Riz is any guide, it appears the President was right when he said “They’re not sending their best”… There is never much sense of escalation either, with the potential threats being defused with surprising ease. Instead, we head towards a conclusion that doesn’t actually conclude very much, leaving the film feeling more like the pilot episode for an earnest HBO series.

The performances are good, and there are moments which rise above the neon-drenched grime, such as Riz’s calls back home, where she fabricates an alternate life. Yet they can only take this so far, and the film ignores an obvious truth. While the “American dream” may not be as depicted in the adverts, Riz’s life is still almost certainly an improvement over what she had back in India. The problems which arise subsequently are largely the consequence of her own actions, something the movie conveniently forgets, choosing instead to blame society.