I was drawn in by the prospect of seeing Ginger (as in Ginger Snaps) alongside WWE superstars Ziggler and Kane. It just seemed such a weird concept. In the end though, this is a marginally competent yet completely forgettable action film. It could have starred Amy Coney Barrett, and still wouldn’t have been memorable. Ziggler is hero Ray Thompson, playing the most tropey of tropes. He’s a rogue cop, who gets suspended for not following the rules, but inevitably goes on investigating anyway. Kane is his captain, and Isabelle plays Julia Baker, the internal affairs officer, who – equally inevitably – ends up helping Ray solve the case. 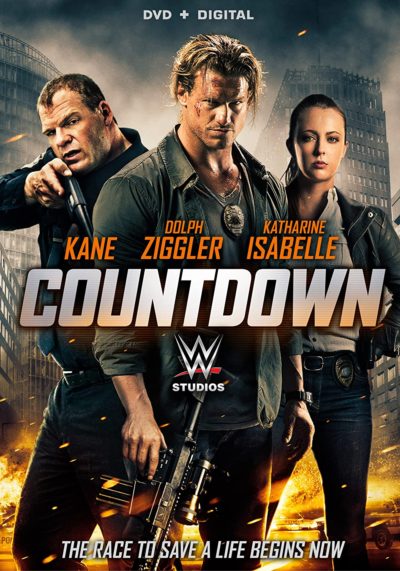 That could be anything: in the larger-scale of things, it doesn’t matter much. But, should you care, it’s tracking down a kid who has been wired into a harness of military-grade Russian explosives and held to ransom, after the bomber gets shot while trying to collect the ransom. This takes place at a WWE show in Seattle – I suspect, purely to allow for gratuitous cameos by other wrestlers, including Rusev (top, about to get Dolph’s gun superkicked from his hand), Roman Reigns and The Big Show. There ends up being a bit of a convoluted section where Ray gets framed as being behind the bomber. Yet it can safely be ignored, as can the angstier side of his character, involving the death of his young son, killed by a drunk driver. The tragedy appears intended to provide motivation for Ray to rescue the kidnapped kid. Because, I guess, being a kidnapped kid isn’t enough.

It is all a thin excuse for Ray to run around Seattle engaging in conduct egregious enough, to make even me wonder if defunding the police might make sense. This reaches its peak when he storms the Russian consulate, brutally interrogates a senior diplomat, and leaves him, gut-shot, on the consulate floor. Ray skips out of the building with absolutely no repercussions, before you can say, “Hey, isn’t that technically foreign soil, making it an act of war?” Even Jack Bauer couldn’t pull this level of deniability off. Mind you, more implausible still is Ray going ringside to drop off the ransom, without having his ticket checked multiple times. Or getting into the venue, since security at WWE events is notoriously harsh. If bottled water isn’t allowed in, two million dollars of cash might be an issue.

Yet if you expect anything expecting stringent, real world logic to apply in a film made by the WWE… Well, more fool you. It’s like complaining that getting thrown off the top of a steel cage and through a table should hurt more. Extending this comparison does illustrate the problem here: this should be like a major pay-per-view event, yet is nothing special, closer to a random episode of RAW or Smackdown. Ziggler has the physical presence you’d expect, and the action side is decent enough. It’s the cliche-filled script which condemns this one to the level of a nameless local jobber, already in the ring.