Interesting to contrast and compare this to Fanatic, Hammer’s other psychological thriller starring a veteran American actress. The Nanny is considerably more subtle and understated. But that perhaps also explains why it is rather less fun. After Bankhead’s scorched-earth performance, Davis demonstrates extreme restraint. Indeed, at times, it feels like she is acting entirely with her eyebrows. While that’s an interesting thespian exercise, it also feels like Bette never bothers to get out of second gear. Sometimes less is more. This, however, is not one of those times.

It’s the story of the Fane family. Mother Virginia (Craig, who’d go on enormous fame in seventies British sit-coms); a largely absent, but stern father; their two kids, Joey (Dix) and Susy; and the nanny who has been with the family since Mum was a little girl. Sorry, did I say two kids? It’s one now, Susy having died in circumstances best described as murky, which led to Joey getting packed off to the junior loony bin for two years. He’s now coming back home, even though the staff quietly admit to one another that he is far from cured. He quickly makes clear his disdain for Nanny – that’s all she is ever called, we never learn her real name. And it’s not long before Joey is acting out, and blaming Nanny for the escalating mischief, up to a poisoning incident which sends Virginia to the hospital. 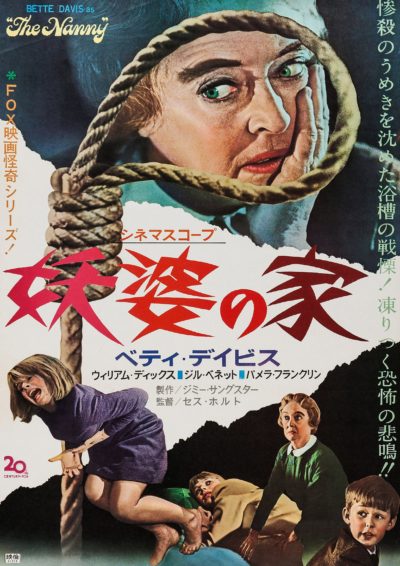 There isn’t really much in the way of tension to be found here. Either Joey is the proverbial “bad seed”, or Nanny really is driven by psychotic impulses and is trying to kill him, as Joey claims. And, to be honest, the casting largely gives this away, because you do not hire Bette Davis to play Mary Poppins. [Incidentally, the movie featuring that character, explicitly name-checked at one point in this, was released less than a year previously in the UK, so this could be considered the anti-Poppins] It’s much more a question of when the mask will come off, and what form the subsequent outburst will take.

The third act, where everything comes to a head, manages to get rid of both parents. Father is off to Beirut in his job as a Queen’s Messenger, a diplomatic courier, and mom is getting her stomach pumped in hospital, as mentioned above. With Joey point-blank refusing to be left alone with Nanny, the doctor calls over Virginia’s sister, Aunt Pen (Bennett), to babysit. It has been established early on that Pen has a weak heart, following a childhood bout of rheumatic fever, and inevitably she becomes a target, after she becomes convinced that Joey is right, and the Nanny is indeed trying to kill him.

It’s a bit of a misstep, given we’ve never been given much reason to care for Pen previously. Then again, audience sympathy is overall at a premium. Virginia appears to spend most of her time either sobbing, drinking or sobbing and drinking, while her husband seems to be a devotee of The General Franco Guide to Parenting. The first time we see Joey, we learn his idea of a good joke is faking his own suicide, and he only slowly turns things around. That only leaves his little sister, who is totes adorbs, yet she just appears in flashback sequences. There is basically no significant character in the film whom I would call genuinely likable. If not fatal, it does limit the impact of the peril on the subjects.

On the other hand, when we find out the backstory behind the Nanny, it is certainly poignant. This is far more nuanced than Fanatic, where the motivation was not much more than “She’s a religious fruitcake, alright?” In little more than three minutes, the movie manages to make some striking points about class and sixties society. Indeed, its strong implication, that the working class are made to sacrifice their own lives for the benefit of the upper-class, is borderline revolutionary, in the literal sense of the word. Social commentary isn’t an area into which Hammer strayed very often in its genre movies, making this all the more memorable. 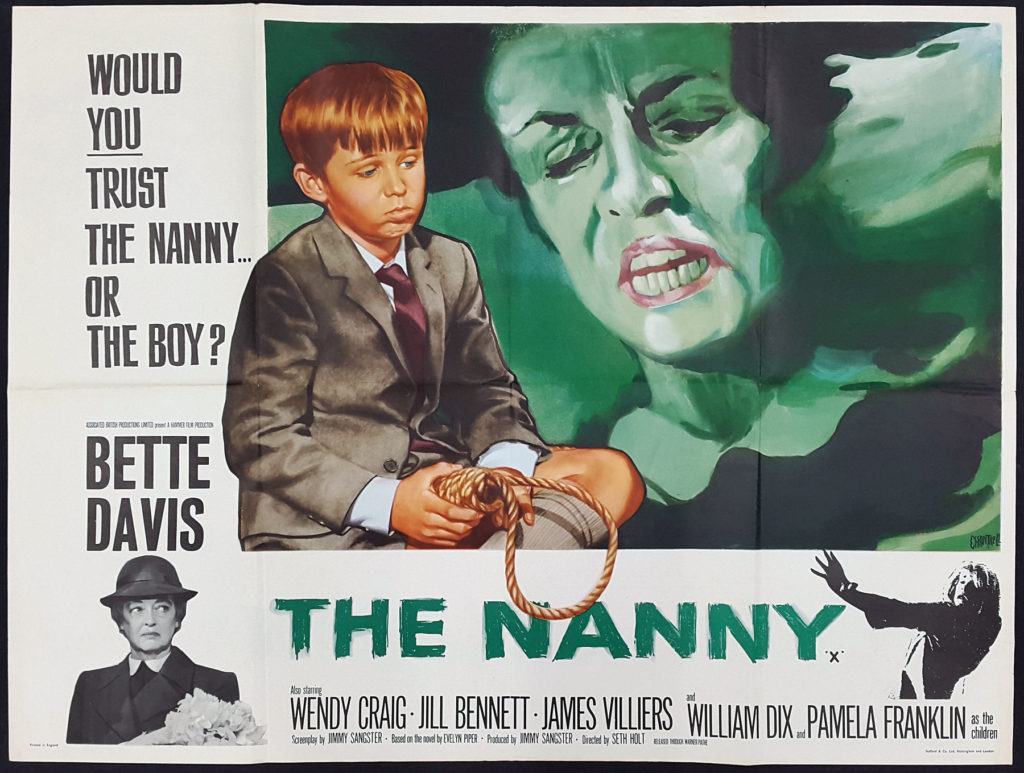 This was based on a book by Evelyn Piper, who also wrote the novel of Bunny Lake is Missing, which was made into a film the same year.  Bette wasn’t originally intended to get the role, the first choice being Greer Garson, who turned it down. The director and Davis appear to have had a fairly fraught and combatative relationship during filming, Holt recalling, “Oh, it was Hell! She was always telling me how to direct. When I did it her way, she was scornful. When I stood up to her, she was hysterical.”  On the other hand, writer Jimmy Sangster, who was also a producer here, said, “I thought she was the most professional actress I ever worked with.”  The actress later called Holt, “the most ruthless director I’ve ever worked with outside of William Wyler” – although apparently meant the comment in a positive way.

I found the results quite a mixed bag. There’s almost nothing here to which I can relate; the Fane family, and their relationship with Nanny (Virginia’s in particular), are an entirely alien species. You just have to take it on trust that people like these exist, and act they way they do. But there’s no doubt that Davis’s performance is always worth watching, even if it’s as much for what she doesn’t do, as what she does. I just found the script both too obvious, and too low-key to be fully successful. Perhaps if it had opened with the flashback establishing the Nanny’s motives, it would have given us a hook on which to hang our emotions. Instead, there’s not much impact until the end, and even there it comes off a degree or two flatter than I feel it could have.