“Not even random hook-ups with total strangers are safe any more…” They’re back! And just as cheerily dumb as ever, I’m pleased to report. After taking on the coronavirus and the Tiger King, this time the focus of Barbie (Cameron) and Kendra (Sydney) is… Well, you can guess from the title. Two sci-fi movies, The Day Time Ended and Space Thing, are dubbed, mashed together and combined into a semi-coherent special, entitled “Declassified: Mind-blowing shit you never knew about Area 51,” apparently narrated by a Morgan Freeman-alike. This is watched by our pair of heroines, as it airs on the conspiracy-oriented Probe-U-Network – “TV that watches you, as you watch it.” Meanwhile, their magic remote control bounces B&K from reality to reality, ending – and I trust this isn’t a spoiler – in outer space, hurling towards a giant coronavirus. As you do. 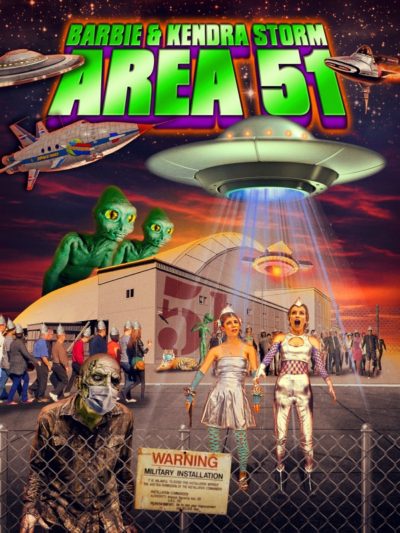 The two movies pillaged here are certainly… something. The Day Time Ended may be familiar, and for similarly parodic reasons, because it was previously used by MST3K in their twelfth season. The story of a family whose house is visited by an alien obelisk, I was particularly amused by the obelisk’s efforts to pass itself off as an Alexa-like personal assistant. “Why don’t you bring me into the rental home so I can observe you and your earthling family. I mean, play music for the big fiesta hahaha.” As for Space Thing? That’s a seriously WTF soft-porn ultra-cheap slice of cheese, which makes Plan 9 From Outer Space look like Star Wars. Co-directed by David Friedman in 1968, it hardly needs parody. Needless to say, I’m fast-tracking that one for a full review.

I’d complained about previous entries overstaying their welcome, and you can’t say that about this, coming in as it does at under fifty minutes. Instead, now it feels like only half a film. No, I am never happy, thank you for asking. 🙂 Still, considering this was a brief (close) encounter, the amount of eye-rolling Chris fitted into this was spectacular. I had a better handle on what to expect, so found the dopey mannerisms of Kendra and Barbie endearing rather than annoying. such as the totes stylish tin-foil tiara worn by the former. Though it is a shame we didn’t get them interviewing anyone this time, since that was a particular highlight of Barbie and Kendra Save the Tiger King. Surely they could have found some alien conspiracy theorist up for a chat?

It is, in many ways, a giant tease, since at no point do they ever storm Area 51. or come anywhere nearer it than the front door of their trailer. The film should only be taken in a spirit which accepts this. I think I’ve finally realized it is a series which will never deliver on the promise of its titles, and that’s part of the joke. There are those for whom self-awareness disqualifies bad movies from consideration, e.g. the Sharknado franchise. I’m not among them, and am quite content to laugh with a film as at it. This provides a bit of both, and similarly, I find myself both anticipating and dreading where this terrible twosome might go next.

Barbie & Kendra Storm Area 51 is out on November 6.