This certainly deserves points for the sheer audacity of the project, and for shamelessly exploiting a pandemic which, at the time of writing, has been responsible for over 165,000 deaths worldwide. Will Band stop there? There’s all of history which could be strip-mined similarly. AIDS Zombies. Bubonic Zombies. Hell, why stop at natural disasters: should we expect Holocaust Zombies? But I guess that’s less fun than ripping your story from today’s headlines – complete with inserted news footage of Presidential briefings and partying spring-breakers. I can forgive Band all this: hell, I embrace the poor taste inherent in the territory of B-movies, from Ilsa, She-Wolf of the S.S. through Bloodsucking Freaks (whose director Joel M. Reed, died last week – ironically, from the coronavirus), even including disease-based movies like Ebola Syndrome. It’s the lazy and slapdash approach which is the problem here. 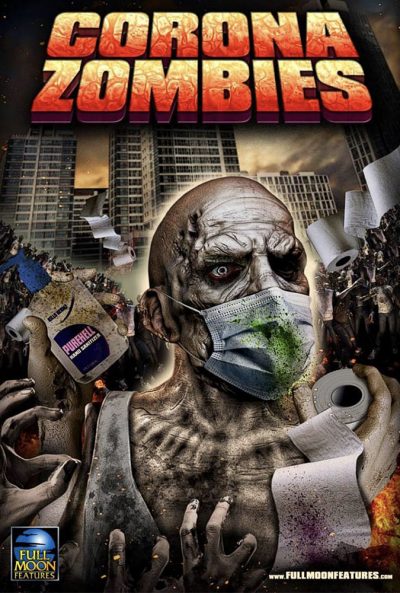 For those were at least actual films. This? Not so much. It’s barely 60 minutes long, and the great majority of the running-time is dubbed footage taken from other films. The main source is Bruno Mattei’s Dawn of the Dead knock-off, Hell of the Living Dead, known in the UK as Zombie Creeping Flesh, under which title it went onto the video nasties list. Its repurposing for this is somewhat ironic, because the original film itself made use of previous stock footage, dubbed to fit the narrative. In its new version, what begins as a raid on someone who hijacked a shipment of toilet paper, morphs into a search for a coronavirus cure, going to the source of the outbreak. Ground zero was an ill-advised attempt by “Scampbell’s” Soup, to produce a bat-flavoured variety for the Chinese market. That is, trust me, among the best jokes this has to offer. There are also clips taken from Zombies vs. Strippers, because tits.

The new footage, what there is, has Barbie (Cameron) returning home from a trip to the supermarket, to follow the pandemic on TV, and chat to her pal, Kendra (Sydney, unseen and literally phoning in her performance). At one point, Barbie takes a shower, shown above – note she is actually dressed! – during which she is startled by a zombie that isn’t actually there. Is this all perhaps just a dream? This slightly promising avenue for exploration is rapidly discarded, in favour of more recycled footage which rolls out every coronavirus joke you’ve heard before. Did you know it shares its name with a Mexican beer? There are likely also some jokes you thought of, but decided were too shite to bother telling.

The heavily-condensed version of Zombie Creeping Flesh included here proved energetic enough to make me want to see it. I mean, how many other films have a zombie reaching into someone’s mouth, and popping their eye-balls out from the inside? However, I’m taking all the dire reviews of the full version under advisement, and the best thing is probably the Goblin soundtrack. Mattei was a big fan of theirs, but couldn’t afford to get them to compose anything new,so instead ponied up for the rights to recycle their work on Dawn of the Dead. Band, meanwhile, has already announced a follow-up, titled Barbie and Kendra Save the Tiger King. Once again, I can only applaud the audacity. However, I think we’ll be socially distancing ourselves severely from that one.