This middle-of-the-road rating is not a reflection of this being a middle-of-the-road film. In some ways, it is the absolute worst cinema has to offer – and, yet, it’s gleeful desire to shock and offend can only be applauded. It certainly won’t be easily forgotten, and will likely generate far more of a reaction for most viewers, than the entire Marvel Cinematic Universe combined. Personally, it’ll always have a place in my heart: a VHS tape was a Christmas gift to Chris, early in our relationship. That she appreciated it, is testament to why we’re still together. After all, when Lloyd Kaufman calls this “probably the most fucked up film in the Troma catalogue,” he’s speaking from authority. 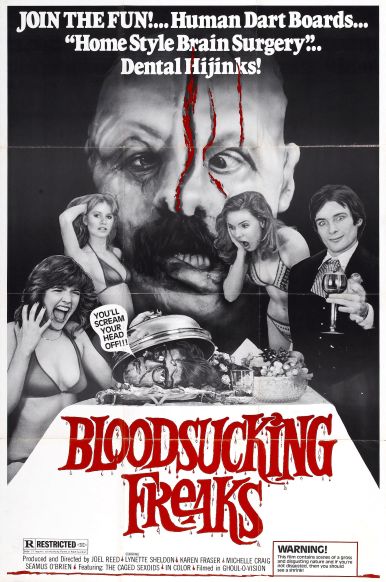 There’s a definite H.G. Lewis vibe here, in particular The Wizard of Gore, as well as a clear debt to the Ilsa franchise. Sardu (O’Brien) is running a white-slavery business, with artistic aspirations. For he also operates a New York cabaret show depicting the torture and mutilation of naked women – all real, though the audience don’t know it. They include a sniffy critic (Dellay), whom Sardu and his blow-pipe wielding midget sidekick, Ralphus (De Jesus), kidnap, for reasons that remain kinda vague. More coherently, they abduct ballerina Natasha Di Natalie (Krem), and brainwash her into performing at the cabaret. This doesn’t impress her boyfriend, who bribes a sleazy cop to dig into what is going on. Needless to say, it doesn’t end well for just about anyone.

It’s all gloriously extreme and offensive, likely reaching its pinnacle with the scene in which a mad doctor pal of Sardu’s pries out all of a victim’s teeth, drills a hole into her head and sucks her brain out through a straw. Much of the rest is considerably more mundane nastiness, though anyone who shrieks about Hollywood movies being “misogynist” would have their head explode by this [an all-round win for society, I’d say]. Save Natalie, precisely one female character so much as merits even a name. There is no effort at all to give them depth, and they’re little more than helpless victims of Sardu and his pals. This is female flesh as meat, pure and simple. “Her mouth will make an interesting urinal,” muses Sardo in regard to one ‘actress’.

Somehow, including Veri’s party piece feels about the only way in which Bloodsucking Freaks could be more memorable.