The other classic religious horror pic of the seventies, and for me, this is better than The Exorcist. “Heretic! Blasphemer! Kill the unbeliever!” Yeah, I know. I think it’s because this is rather more grounded in the Satanic happenings. On an individual level, there’s very little here which isn’t possible: no levitating teenagers, for instance. Instead, Satan achieves his goals on Earth through a mundane, in the secondary sense of the word, combination of human malice and almost Final Destination-style accidental death [I’m likely not the only one who had to surpass an urge to yell “180!” during one such incident]. Then again, I’ve always been a sucker for an apocalypse, despite my lack of faith, even one which is in the very formative stages, as here. 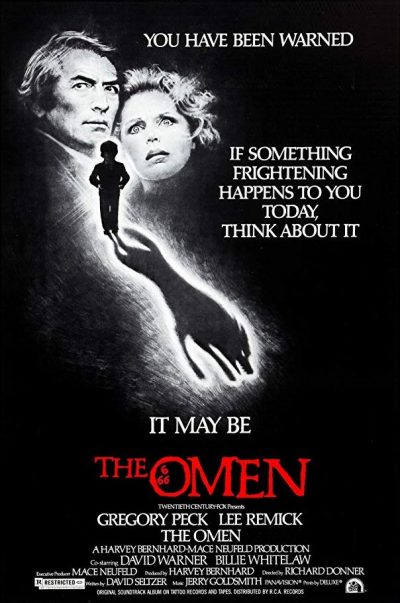 American ambassador Robert Thorn (Peck) quietly arranges to adopt a baby, Damien, after his natural-born son dies just after being born. However, as the years roll by, a series of curious incidents occur. The suicide of their nanny. Damien’s very strong aversion to churches. And the death of a priest who seemed convinced Damien is not a normal child. When pre-mortem predictions made by the priest start coming true, Thorn and photographer Keith Jennings (Warner) begin digging into the past, and find out that Damien is the Antichrist. And there I was, convinced all along it was actually Johnny Rotten.

I have to say, Donner has had among the most eclectic careers of any director. The successes on his filmography includes The Goonies, Lethal Weapon and Superman. But in terms of return to budget, this was likely the best, tapping into a nerve at the box-office and taking in more than twenty times its cost. It became part of the cultural fabric, to such an extent that over two decades later, South Park could still devote an entire episode to spoofing it. And I’m not sure the reputation of Rottweilers will ever recover, from being literally portrayed as Satan.

A huge part of that success must be credited to Jerry Goldsmith’s looming score, which gave him his only Academy Award win, in nineteen nominations. However, the performances are uniformly solid, beginning with Peck, and also including Whitelaw as the replacement nanny – I want to see a three-way cage death-match between her, Mary Poppins and Nanny McPhee. Even the kid playing Damien, Harvey Stephens, is all the more creepy for being entirely understated. It makes for a complete contrast to Linda Blair’s thrashing and cursing in The Exorcist, and is all the more effective for it. [Stephens didn’t appear in another feature film for thirty years, until making a brief cameo as a journalist in 2006’s remake]

To me, that calm restraint is how the Devil should be. When you’re the Prince of Hell, you don’t need to shout about it. But it’s interesting that both these horror giants depict children as the face of ultimate evil. Does that say something about the seventies? Or about children?