Or “It’s Always Foggy in Whitewood,” as it should perhaps be titled. This is really a film of two halves, Brian. In the first, student Nan Barlow (Stevenson) goes to the remote New England town of Whitewood, at the behest of her teacher, Professor Alan Driscoll (Lee). She thinks she’s there to research witchcraft. In reality, Nan has been sent there to get some practical, hands-on experience of it – by becoming a sacrifice to a coven headed by local landlady, Mrs. Newless (Jessel). She may be the re-incarnation of Elizabeth Selwyn, a witch burned at the stake three centuries earlier, presumably because she weighed the same as a duck. 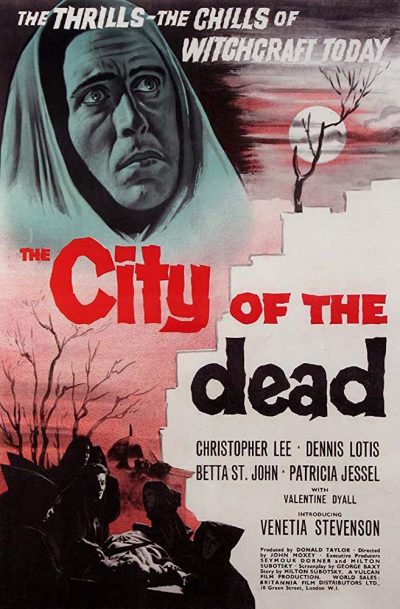 The film then moves into the second half, and the search for the missing woman led by her brother, Richard Barlow (Lotis), a man of science. We can tell this because he mocks Driscoll and his sister, saying things like, “Surely any good encyclopedia will give you all the nonsense you want to know about witchcraft.” He’s accompanied by her boyfriend, a young man so vapid I can remember absolutely nothing about him. He doesn’t even have the annoying smugness of the appropriately-named Dick. The film is considerably less interesting when this pair are on the screen, to the point that I may have nodded off before the finale, where the coven spontaneously combusts when the shadow of a crucifix falls on them. I kid you not. Bet that makes them… feel a little cross.

Thank you, I’ll be here all week. Try the veal.

It’s a lot more fun in the earlier stages, when Miss Oblivious is wandering round a town which could not possibly be more ominous if it tried. There’s the permanent fog, the phantom hitch-hiker picked up on the way into town (played by Valentine Dyall, the voice of Deep Thought in the radio Hitch-hiker’s Guide to the Galazy) who vanishes when you park, the procession of hooded figures through the town, the trapdoor in the floor of her room., and the way everyone just stops and stares at Nan when she walks past. And that’s entirely discounting the creepiest thing of all: the jazz-disco held by Mrs. Newless. Seriously, the film has an actual “Jazz by…” credit. If that’s not enough to get you nopeing the fuck out of there, what is?

Mind you, Nan is the sort of girl who lounges around her room in the sixties equivalent of Victoria’s Secret attire, and doesn’t even recognize her own foreshadowing. She goes into great detail to Mrs. Newless about Selwyn “marking a young girl for sacrifice by obtaining an object of value belonging to her.” Then, in literally her next speech, says, “I seem to have misplaced my locket.” HELLO! MCFLY! If you’re going to ignore all the blatant warning signs, then at the risk of engaging in victim-blaming, you frankly deserve to end up lying on an altar and getting stabbed. Even the presence of Lee can’t drag this up from being much more than lightly amusing – and that, only for about half its duration.

[March 2004] This enjoyably daft horror film has Stephenson as a history student, inspired by her lecturer (Lee) to visit a remote New England town and research a paper on witchcraft. Once she arrives at the inn run by Mrs. Newless (Jessel), she ignores all warning signs: the staring locals; a rant from a mad priest; her landlady’s resemblance to a witch burned in 1692; oh, and the dead bird in her room, discovered immediately after reading about precisely the same thing in an old manuscript. How she got into college escapes me. As a result, her brother (Lotis) and boyfriend then arrive to look for the missing girl, just in time for the other major sacrifice of the witches’ year – which in this movie, seems to occur about two weeks after the first one. Guess it’s like the Thanksgiving/Christmas thing.

Christopher Lee is always worth watching, and delivers a fine performance here as the sophisticated urbanite who might not be what he seems [Check out his fabulous reaction when asked if he has ever met a real witch] The rest of the budget would seem to have been spent on fog; certainly, a logical script doesn’t appear to have been a major consideration. The finale is something of a disappointment, even if we do learn that witches spontaneously combust when the shadow of a cross falls on them. Bit of a dumb idea to hold your ceremony in a churchyard then, eh? Still, there’s more than a hint of The Wicker Man to this 1960 movie, and at only 76 minutes, it can hardly be accused of prevarication. C