Probably the first surprise in this is the opening credits, which say, “Starring… Tom Skerritt”. Wait, what? It’s easy to forget, there was a time before Sigourney Weaver’s name was tied so intimately with the Alien franchise, to the extent I’m somewhat hard-pushed to think of other work she has done. Seriously: I just looked through her filmography on the IMDb, and I doubt more than two or three of them rang any bells: the one about the gorillas, the one where she was a paranormal investigator, and Avatar. Otherwise, crickets. She was nominated for Best Actress and Best Supporting Actress Oscars in the same year (1988) – the former for the one about the gorillas – so I guess she was doing something right. 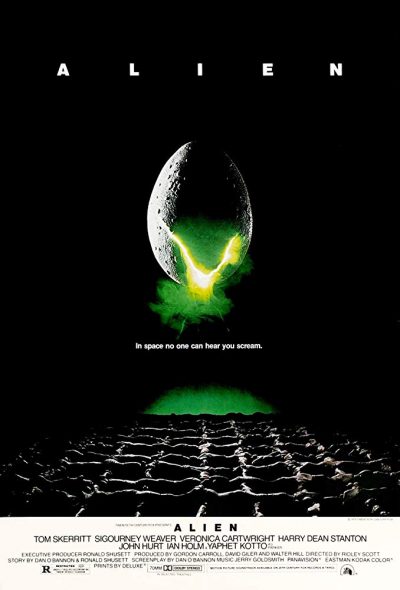 The other thing which stands out about Alien now is, it’s a bit like Monty Python‘s TV series. By that, I mean, at its best, both are great… but, boy, is there a lot of easily forgotten filler. Here, it’s easy to remember certain scenes, most obviously, John Hurt’s last meal, which is right up there with the blood-test sequence from The Thing as genre landmarks. However, I’d forgotten just how much slow creeping around dimly-lit corridors this contains. It’s well-photographed slow creeping around dimly-lit corridors, to be sure. This is Ridley Scott, who could deliver well-photographed paint drying. Yet, for anyone who has seen this a million before, so knows who and why gets to the end, it’s not particularly exciting.

The other big plus is the monster, among the, if not the most iconic in SF. Getting H.R. Giger to design the creature was a master-stroke, and the film does a real good job of rendering true his visions. Not just the alien, though it is obviously the pinnacle. The set with the “space jockey” – the corpse of the ship’s former pilot – also looks hugely impressive, and worth noting, Giger air-brushed the entire thing by hand. The entire movie is a demonstration in how well-executed practical effects age a great deal better than crappy CGI. Although having said this, the scene where the chest-burster whizzes away into the ship’s interior, never fails to provoke a hearty chortle. Guess they couldn’t afford legs.

In terms of the movie’s impact, it’s a little like Night of the Living Dead. There’s no arguing ground was broken and its influence on the genre (genreS, really) is unquestionable. Yet I’d argue it only set the foundations on which others built better edifices, not least James Cameron. Though we’ll get to the sequel in more detail later this month, there’s a case to be made this is the franchise where the second entry didn’t just surpass the original, it was superior by the greatest distance. [Other potential candidates include Mad Max and The Evil Dead] Not that Alien is bad, by any means. It’s just, in comparison to Aliens, it seem obvious to me the first film doesn’t make the most of the monster at its core.