I was having a discussion on Facebook recently about what films from this decade might be regarded as classics down the road. The Thing provides a cautionary tale in such things, because it was almost ignored on its initial release. Its opening weekend saw it finish eighth at the North American box-office: behind the sixth week of Annie and only one slot ahead of Megaforce. While it did eventually recover its production costs, it was also eviscerated by many critics at the time, notably Vincent Canby of The New York Times, who called it, “A foolish, depressing, overproduced movie… Too phony looking to be disgusting. It qualifies only as instant junk.” 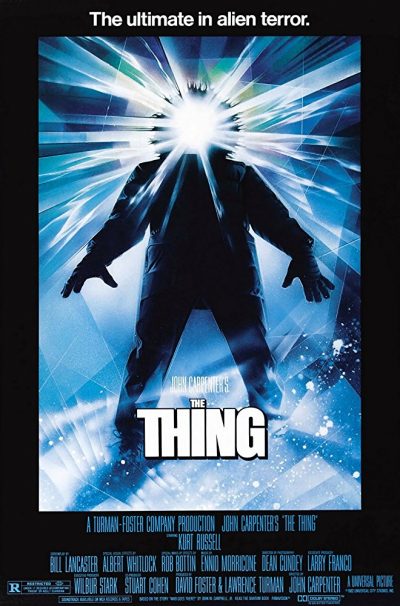 Time has been much kinder to the film, and it regularly makes “greatest ever” lists in a variety of fields, mostly sci-fi and horror – though you could certainly argue it’s among the greatest remakes of all-time too, regardless of genre. What it is, is an undeniable counter-argument to those who claim that real horror is what lurks in the shadows. Fuck that, says The Thing. Real horror is a dog whose face splits open and transforms into a tenticular nightmare, or a severed head which grows legs and scuttles away. Credit this aspect to the warped imagination of Rob Bottin, then barely old enough to drink, who ended up hospitalized with exhaustion and a bleeding ulcer during filming.

This, alone, wouldn’t be sufficient, no matter how remarkably well the effects have stood the test of time. But they form the payoff to Carpenter’s expert film-making, ratcheting up the tension and creating a sense of claustrophobic paranoia. This reaches its peak in the blood test sequence, which should be compulsory viewing for any student of cinema, as a master class on how to construct a scene. Writing, editing, direction and acting combine into something which I’d say is the equal of the shower scene in Psycho or the ending of Casablanca. Then Bottin takes over, delivering work which would probably have David Cronenberg going, “Hang on, that’s a bit much.”

Watching it this time, I was struck by how Lovecraftian it felt, particularly in the overpowering sense of creeping dread which rises to engulf the dwindling band of survivors. While Elder Gods and crashed aliens are clearly not the same thing, both can be seen as part of “cosmic horror.” Interestingly, the story on which both this and its predecessor (1951’s The Thing from Another World) were based, John W. Campbell’s Who Goes There?, was published in August 1938, two years after H.P. Lovecraft’s Antarctic epic, At the Mountains of Madness. And there’s no denying Carpenter’s love for Lovecraft, most apparent in his 1994 movie, In the Mouth of Madness. Even Lovecraft’s marginalization of women is reflected in a film whose sole female speaking role outside of stock footage is a chess computer [voiced by Carpenter’s then-wife, Adrienne Barbeau]. On the other tentacle, “indescribable” is clearly not in Bottin’s vocabulary…

Its brilliance is all the more remarkable, given the lack of any conclusive finish. After all the mayhem, we’re left simply with two men, sitting in an increasingly chilly landscape, watching each other as the base burns around them. Is one – or both (haha, joke’s on you then, thing!) – still infected? The director refuses to answer that question. Fade to black, and the pulsing Ennio Morricone score, which takes more than a little inspiration from Carpenter’s own work. This is how you do an open ending, and is in complete keeping with the pessimistic nature of the film as a whole.

It probably explains the film’s commercial failure, coming out as it did during the summer of E.T., with its considerably more friendly alien castaway. This is an absolute counterpoint to Spielberg, and part of me wants to create a mash-up of the two movies, where E.T. ends up in the Antarctic, and is greeted with flamethrowers, while Elliott and his friends have to deal with something “weird and pissed-off”. I doubt either would end well…