This Lovecraftian-inspired action/horror mix is full of good – or, at least, interesting – ideas. It plays almost like a Call of Cthulhu scenario, with the players having to defend the top-secret government facility of the title from a group of cultists who are attacking the base. They are aiming to liberate one of the Elder Gods, Erebus, who in the form of the human he has possessed (Johnson), is about to be deported back into the infinite darkness. This is the latest incident in an ongoing covert battle by humanity, which has been going on since the twenties, though with decreasing intensity. At least until now. 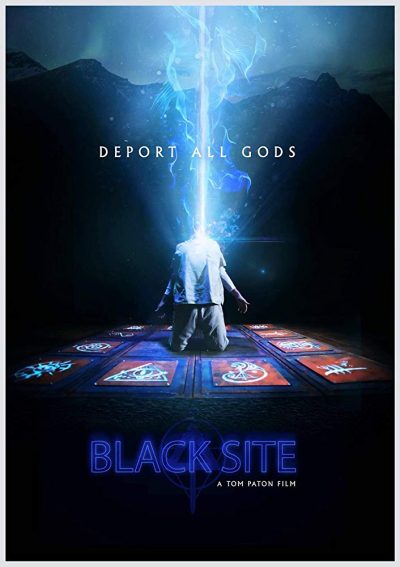 The central character is Ren Reid (Schnitzler), an operative of Artemis, the group running the site. She has dreams of becoming a field agent, but psychological instability – which just possibly, might be connected to Erebus and his role in the death of her parents – has always prevented her. She has to get the deportation specialist, Sam Levi (Buckingham) into the heart of the base, so he can sent Erebus on his way. However, the cultists, under their leader, Ker (Robinson-Galvin), are intent on stopping this from happening, by any means necessary. Meaning Ren, and to a (much!) lesser extent, Sam, have to fight every inch of the way.

There’s a lot of potential here, and when it’s realized, this is an enjoyable flick, spearheaded by Reid in a no-nonsense role. The fight choreography is well done, though almost inevitably, the facility appears largely lit by 40-watt bulbs – whether to “add atmosphere” or cover up the stunt doubling is probably a matter of opinion. The problems are more the bits between the fights, and in particular the lengthy sequences of Erebus sitting in the middle of his occult holding cell, jawing away to the two agents keeping an eye on him. Johnson simply doesn’t have one-tenth of the screen presence necessary to pull off portraying what is supposedly the fifth-oldest creature in the universe. He’s woefully unconvincing, unless you can see how said creature’s aeons of life experience would result in a somewhat douchey gym bro with bad hair.

Similarly, the flashback sequences involving Ren are both too frequent and not well enough carried out to add anything of value to the narrative, coming over as empty padding. While this is a universe I’d like to hear more about, if the film really wanted to be a Lovecraftian take on The Raid, as it seems, it should have stripped away all the back-story, since we’re given inadequate reason to care. Stick to the basics of Ren trying to get Sam to the spot where he can carry out extraordinary rendition on his target, and we’d be better off. Though I’m still trying to figure out the apparent political commentary built into the concept here. It seems to be suggesting, given a sufficient level of threat, it’s fine to abolish normal standards of justice, bypassing a trial and proceeding straight to the punishment. That’s an almost refreshingly anti-liberal point of view.