If not original, this Chinese zombie movie is done with sufficient energy and enthusiasm to make for solid entertainment. We join the z-apocalypse in progress, with our band of survivors trying desperately to get into a safe haven, as the ravening hordes close in on them. The movie then flashes back to earlier days, and we see how things kicked off. The focus is on Jack (T. Yang), the put-upon driver to “businessman” Rich (Y. Yang). Quotes used advisedly, for he’s the kind of entrepreneur who carries a baseball-bat in the trunk of his car. [Though admittedly, this comes in quite handy during the ensuring chaos] 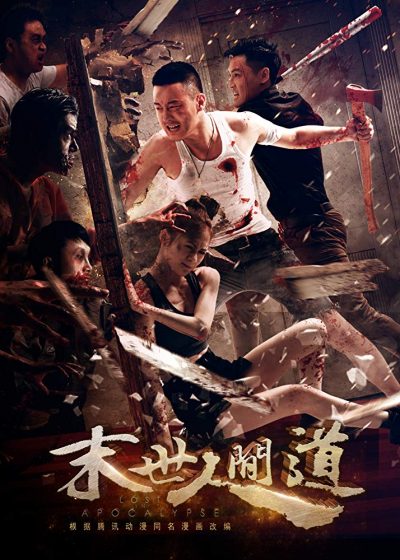 Jack drops Rich off at the hotel where he is meeting with various people, including a corrupt bureau director (Jia, looking weirdly like John Woo to my eyes) and local reporter Helen (Zhang). There’s also Jack’s old friend, Michael; the pair were students together, before Jack dropped out to take care of his sick mother. Needless to say, these relationships are tailor-made to create the kinds of interconnections which can be exploited for dramatic purposes during a subsequent crisis. And, hey, what do we have moaning into view? Flesh-eating hordes, albeit more of the 28 Days Later variety, these zombies being equipped with track spikes and energy to spare, in addition to the obligatory craving for human flesh.

Thereafter, things follow more or less the anticipated, well-trodden path. Minor characters get bitten, turn and have to be dispatched. The motley crew of survivors head from the hotel towards a safe location known only to the director. What appears to be sanctuary turns out to be anything but. Characters reveal their hidden depths – both of brave self-sacrifice and self-serving cowardice. And an adorable moppet is acquired along the way, purely so the audience’s heart-strings can be tugged on at appropriate moments. It’s like the Cliff Notes version of The Walking Dead, you can all but see the writers ticking off their bullet list of elements.

Despite this, it perhaps goes to prove that execution is as important as, if not more so, than your content. Wang does a particularly good job of making Jack a sympathetic character, not least through pairing him with the arrogant and irritable, yet far more successful, Rich. The resulting sense of social injustice inevitably leaves the viewer pulling for Jack, and credit also Y. Yang for his work as Rich: he manages to keep his character just on this side of stereotypically evil. It’s a nice balance between wanting him to receive his come-uppance, and admiring his willingness to do whatever is necessary in order to guarantee his own survival.

Technically, it’s all sound enough, if unspectacular, and the movie probably does need at least one sequence which will stand out in the viewers’ mind e.g. the railway station scene in Train to Busan. However, given the lack of anything particularly new, this works better than you might expect – likely because, much like its zombies, it doesn’t dawdle around.