As children, brothers Vincent and Michael watch their father shotgun himself after a burglar steals their life savings. Years later, Vincent (Cairns) is a nomadic Catholic priest, offering absolution out of a mobile confessional, with Michael (Albright) helping organize things, taking donations, etc. Except things aren’t quite as… spiritual as they seem. For Vincent blames himself for his father’s death, and if he hears a confession involving theft of any kind, flies into a psychotic rage. The penitent doesn’t get away with three Hail Marys and five Our Fathers, to put it mildly. Michael’s task then becomes more to do with disposing of the evidence, though the “thing” in the basement of their headquarters helps out there, subsisting on the resulting dismembered limbs. 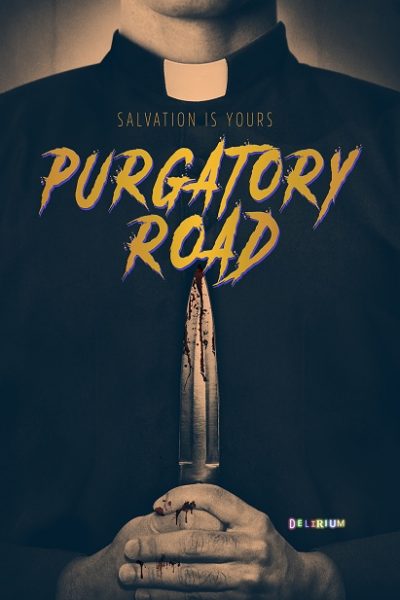 Michael is growing increasingly disenchanted with the situation, not least as he has fallen for diner waitress, Ruby (Crim), and wants to give up cleaning duties for a more normal life. Stressing his relationship with his brother further, is the arrival of Mary Francis (Robinson), a cheerfully unrepentant spree killer who makes Vincent seem well-balanced, and who enthusiastically exploits the opportunities for mayhem provided. You don’t have to have seen too many entries in the film noir genre to figure out that this bizarre love triangle is not going to end happily for anyone concerned.

The story as told here does have elements of weakness. How did the brothers get onto this path? How are they able to get away with Vincent’s crimes for so long? You’d think authorities would quickly figure out the missing people were all last seen going into his confessional booth. And to be honest, the story as a whole kicks off only after the arrival of Mary, and you figure out it has been sitting in a holding pattern for much of the first hour.

Yet despite these negatives, you don’t mind, or even particularly notice, such is the appeal of watching the pair operate on a day-to-day basis. We’ve recently been watching the second season of Preacher, and maybe bizarrely, this film reminded me a bit of the TV show: A man of God, his girlfriend, and another man, traveling around the south, causing mayhem. Though here, it’s the minister who is the volatile one, with his sidekick trying to keep things in check. It’s also without the supernatural elements and generally darker in tone – though not without levity, such as some of the confessions which don’t end in slaughter. What it does share is a very strong visual sense; Savage put a lot of thought into the “look” of his film, and it pays off. Additional impetus comes from Glen Gabriel’s effective soundtrack.

However, it’s like the trio of strong central performances which probably made this the best of the features seen at this year’s ALIFFF. Cairns and Albright feel like brothers; not so much due to any physical resemblance, it’s more the way they interact with each other which convinces the viewer of their relationship. Robinson is a little fire-cracker – by which I mean, she’s highly likely to go off at any moment. It’s the kind of role that must have been fun to do, and the energy comes through in the end product. I’m going to have to check out Savage’s other work, and see if it’s as interesting as this.