By coincidence, we watched this on the 37th anniversary of its theatrical release, at the Redford Theater in Detroit. That must have been quite an experience, watching the film with no advance knowledge of its content or reputation. I imagine you’d have got some very funny looks, if you’d told anyone on the night – not least the director and star – that almost four decades later, Campbell would be playing Ash on cable TV, while Raimi would have directed versions of both Spiderman and The Wizard of Oz. Plus the film would have led to two sequels and a remake with about fifty times the original’s budget. 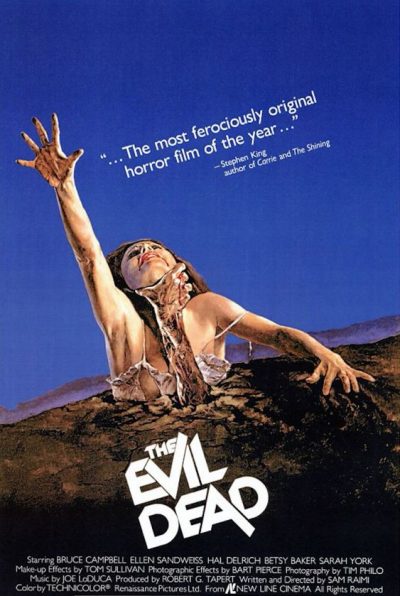 A little like Alien, this pulls a switch in focus. Early on, it looks like the hero is going to be Scott (Delrich, who appeared only in Crimewave thereafter). He’s the man bravely going into the basement, after the trapdoor flops open. Yet, he’s also a bit of a dick, who continues playing the tape recording of Professor Raymond Knowby, long after any sensible listener would have noped the fuck for the off button. Which is exactly what Cheryl (Sandweiss) does. If only Scott had listened to her. Pencils in ankles, girlfriend dismemberment and, of course, arboreal violation (#TreeToo?) could all have been avoided…

Eventually, Ash takes over; Campbell was the only one to go onto a significant career, and certainly takes a good chunk of the damage, throwing himself about with the energy appropriate to the 21-year-old he was at the time of shooting [though his early haircut may be the most horrific thing in the entire movie]. Credit, however, should also go to the ladies of the film, who aren’t exactly let off lightly. Mind you, it’s hard to tell how many of their scenes are actually stand-ins, buried under wheel-barrow loads of make-up and apparently really irritating contact lenses, as people bailed on the production. To all those “fake shemps”, we raise a glass in salute.

The pacing here remains the biggest problem, especially in a first half where precious little of interest happens – not helped by the “college drama group” level to which most of the acting (Campbell included) aspires. Then it kicks off, with Raimi throwing all the tricks in his barely post-teenage arsenal at the camera, and becomes gloriously grubby and gorily gonzo. Admittedly, there are any number of occasions where the execution falls short of the imagination – the climax, in particular, must have bought out the Play-do stocks of every Toys “R” Us store in Michigan.

None of which takes away from the raw energy here, something which has endured and still stands as a lesson to low-budget film-makers today. This instigated the genre which Joe Bob Briggs called “spam in a cabin” in his review of the film, a sub-set of horror remaining popular to this day – not least because its execution doesn’t requite a lot of resources. Yet, while often imitated in the field, Evil Dead has very rarely been matched.

[Original review] The first 25 minutes of this are, to be blunt, pretty dire: sluggishly paced, and without any of the drive that characterizes both the rest of the series, and Raimi’s other work. It isn’t helped by the fact that “teenagers go to a cabin in the woods” is now an utter cliche, or that those shown here are flat and uninteresting to a fault.

And then Cheryl gets raped by a tree.

Read that again, for effect. It’s something you’ve never seen before, and probably never will again – even Raimi now feels they went too far. But, boy, does it get the audience’s attention, and it’s a masterstroke to open with the most memorable sequence.

From there on, this doesn’t quit, and there’s a real sense that anything can happen, to anyone, at any time, which is one of the key components of the genre. The blandness of the opening is flushed away, and it still remains an unrelenting assault. There are a couple of weaknesses: the effects at the end look as if they were done by a badly-hungover Nick Park, and Bruce Campbell’s acting leaves a lot to be desired. But there is a raw intensity that only low-budget horror can achieve, and looking back, it’s no surprise Raimi would go on to become box-office bank, as his visual style is apparent, even with the limitations of the budget.