Is this “horror”? It’s probably one of those movies that defies genre categorization: it could just as easily be called sci-fi or action. But Chris put it on her list for 31 Days of Horror, and I’m not going to argue (even as she’s frantically revising her list to try and make room for American Psycho. Stay tuned, folks…). She says, it’s the surreptitious alien invasion angle which makes They Live qualify as horror, along the lines of Invasion of the Body Snatchers. Not knowing who is truly “human” and who is merely occupying a shell and faking it: that’s the stuff of nightmares. 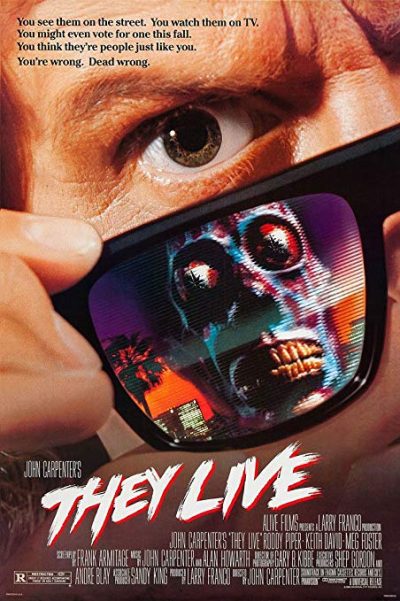 Something often forgotten is that this was inspired by a pulp SF story. called Eight O’Clock in the Morning. Written by Ray Nelson, it was originally published by The Magazine of Fantasy & Science Fiction in November 1963. A quarter-century later, its profile was elevated when the story was adapted into a comic called Nada – the surname of the hero, never spoken in the movie – and Carpenter bought the rights to both versions. The result is anchored by the surprising talents of WWF superstar Piper as Nada, easily the best ever performance by a wrestler (and I include the entire career of one-time WCW champion David Arquette there).

It’s a slow climb initially. Nada moves from Denver to Los Angeles in search of a job, befriending fellow construction worker Frank (David) and becoming intrigued by curious activity in a nearby church. After it gets raided by authorities, he finds a box of sunglasses hidden away there, which allow him to see a section of humanity are actually aliens, who control things for their own benefit. He and Frank join the resistance, and good fortune literally drops them into the aliens’ headquarters, giving them a chance to disable the TV signal which is keeping the “non-woke” segment of the population in the dark.

What hasn’t aged well are the politics, which now come over as a cross between the worst excesses of both Alex Jones conspiracism and the Occupy movement. Each of these extremes were considerably more amusing at the time of the movie’s original release. Now, I’m just… tired of both sides, and this is about as “subversive” as a Bernie Sanders rally. But that hasn’t stopped Carpenter from hinting, earlier this week, that a sequel or remake (it’s unclear which) “might be closer to reality than you think.” [We’ll see: Carpenter hasn’t directed a feature film since 2010’s The Ward] It’s better when simply letting Nada discover things for himself, rather than whacking the audience upside the head with the director’s liberal views.

On the other hand, it taps into a communal paranoia that’s as seductive as The Matrix, and Piper is a great everyman to have at its core. His ad-libbed line, “I have come here to chew bubblegum and kick ass. And I’m all out of bubblegum,” is an absolute classic quote of eighties action, alongside “I’ll be back.” And the glorious, five-minute plus brawl between Nada and Frank over those damn sunglasses, is no less legendary, and may be the best use of a pro wrestler’s talents in movie history. Probably the last “great” Carpenter movie – or at least, the last with great elements.