We had a discussion on Facebook as to who might be the modern-day equivalent of Vincent Price. There doesn’t seem to be an obvious contender. It’s a sharp contrast to the late fifties and sixties, when Price, along with Christopher Lee and Peter Cushing, were all identifiable as the faces of horror – though, of course, all three also appeared outside the genre. There were candidates suggested who have some of the same qualities: Liam Neeson, Jeremy Irons, John Noble or Gary Oldman, for example,  have the necessary maturity and gravitas, yet neither are particularly linked to horror. It’s a shame, because having quality performers like Price in the genre, elevates it. 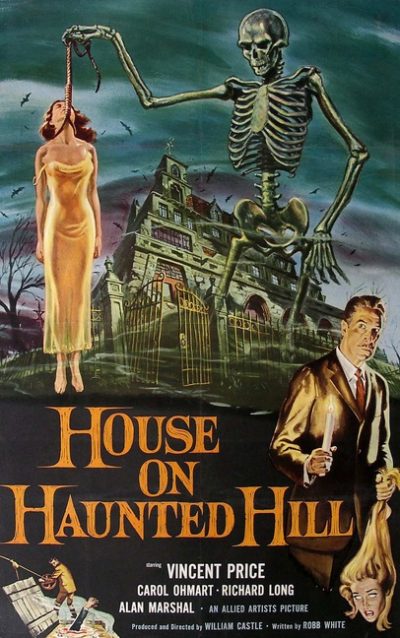 Here, it’s most apparent in the razor-sharp dialogue between Price’s millionaire Frederick Loren and his wife, Annabelle (Ohmart), who are barely on speaking terms. She’s a gold-digger; he has already buried three wives. Hence the battle of dueling venom, with Frederick spitting out lines like, “Don’t you want to go and console him? As you do with most men, in your fashion…” For her birthday, he has organized a party in the “haunted” hose belonging to Watson Pritchard (Cook), which has been the site of several gruesome murders. Those invited – lured by the promise of $10,000 from Loren for staying the night – include a test pilot, newspaper columnist, psychiatrist, and one of Loren’s employees Nora Manning (Craig).

Over the course of the hours which follow, various spectral shenanigans occur, though we eventually find out these may or may not be entirely paranormal in origin. Both Frederick and Annabelle have their own plans for the evening, which don’t exactly involve cake and party hats. Still, who cares, when the house has a fully-functioning vat of acid in the cellar? [Pritchard really needs to make sure his homeowner’s and renter’s liability insurance are up to scratch] Confusion with The Haunting of Hill House is likely inevitable. That’s the more subtle novel which became The Haunting twice – the second time, the same year as a remake of House on Haunted Hill – as well as a current Netflix series.

This version is held together almost entirely by Price’s wonderful performance, with the rest of the characters being useless, irritating or a combination of both. Some of this may be deliberate – Pritchard’s drinking and incessant complaining, for instance. However, Manning’s reaction to just about everything involves hysterical screaming, which is likely about par for women in fifties horror movies. I briefly imagined an Airplane! style line of everyone else queuing up to slap her. I remember seeing this on a double-bill with another Castle exploitation special, The Tingler, at the Scala in London, complete with a skeleton flying into the audience. It was quite delightful, though hard to imagine an audience finding this kind of gimmick at all scary, even in a kinder, gentler era. But watching Price say “She’s so amusing” with enough sarcasm to float a battleship, will never go out of style.