The feature debut for Snyder is considerably less hyper-stylized than the movies he’d go on to make, such as 300 and Sucker Punch. Yet there is still no shortage of flair, perhaps most notably in the way this opens and closes. It’s barely five minutes before Ana (Polley) is being attacked by her infected husband. She eventually escapes, and we see her driving away from above. That shot reveals everything has indeed gone to shit, and we snap into a montage of news footage below the opening credits, while Johnny Cash croons about the second coming. Meanwhile, the end apparently sees an uncertain future for the survivors, sailing away on a boat. Not so fast. The credits start, only to be interrupted by further “found footage”, painting a far grimmer picture. These give this perhaps the best “book-endings” for any horror film, and what comes between them ain’t half bad, either. 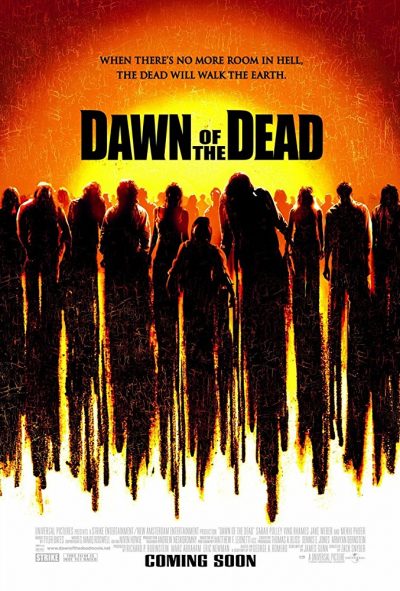 A major topic for argument here are the “fast zombies”. It wasn’t the first to take this approach: a lot of people forget, the reanimated corpses in Return of the Living Dead had plenty of get up and go. However, this was the highest-profile use in the modern era, with Dawn becoming the highest-grossing zombie film of all time [holding the record until Zombieland, five years later]. I have no problems with either approach, because it’s how you use your zombies that matters, rather than their absolute velocity. I have no problem with Snyder’s approach here, which hits the sweet spot of volume and aggression – and the humans are little if any less savage, especially once they realize the whole “shoot ’em in the head” thing.

There’s some good casting against type, starting with Polley, who has been more often seen at the core of indie dramas, rather than highly-bloody horror. To a contemporary audience though, the biggest shocker is seeing Burrell playing an acidic asshole (and refreshingly, not the only abrasive character), making smart-ass remarks like, “It’s nice to see that you’ve all bonded through this disaster.” Post-Dawn, he went on to massive popularity as lovable father Phil Dunphy in long-running sitcom, Modern Family. Seeing him here, enthusiastically wielding a chainsaw to lop zombies off at the knees, is thus likely to trigger a large helping of cultural dissonance. Compared to which, watching Max Headroom turn into a zombie, which you also get to see, counts only as a minor surprise.

As a remake, it does a very good job, updating the concept to the present in a way arguably superior to what George A. Romero would manage the following year, in Land of the Dead. What matters is not just what was added by Snyder and writer James Gunn – another participant who’d go on to considerably greater success down the road. What they took out matters just as much as what was added. In particular, the removal of Romero’s ham-fisted attempts at both comedy (let’s have a pie-fight!) and social commentary (we’re all zombies, really…) also help make for a tighter, more satisfying film. 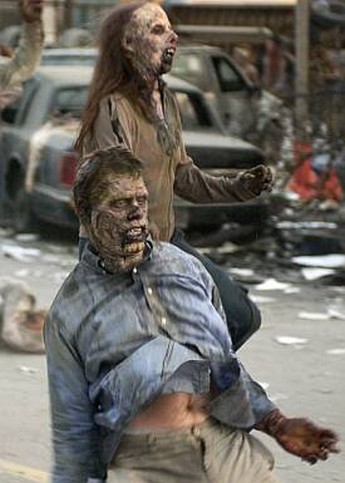 Orignal review: I was never exactly a fan of the original – like its predecessor, Night, it seemed over-rated, Romero’s clumsy attempts at social commentary sitting uneasily with Savini’s impressive effects. The remake eases up on the satire, while retaining the central concept: a group of survivors hole up in a mall, hoping for rescue, while an ever-increasing number of zombies mass outside. Here, however, hope is eventually abandoned, and the humans decide their only hope is to stage a break-out and head for a boat at the nearby marina.

The effects aren’t bad; I hope there’s an unrated DVD, since I suspect trimming was required for an R-rating. However, the remarkable marksmanship is never explained: immaculate head-shots account for 99% of the zombies, and that’s even though they resemble sprint stars more than Romero’s shambling undead. Still, the remake includes sufficient new elements to justify its existence: the best of these are the pregnant but bitten mother, and the gun-store owner, holed up on his roof, who takes out zombies by request.

Yet with addition comes subtraction: the new characters are mostly poorly developed, and they’d probably have been better off retaining the smaller number in the original, especially as this version is 45 minutes shorter than Romero’s director’s cut. Particularly kill-worthy is the irritating teenage girl, whose father is played, in a touching cameo, by Matt Max Headroom Frewer. When the credits rolled, I was going to deduct points for an cop-out ending, but I must say, stay in your seat. You’ll be well rewarded…