The problem with having watched Shaun of the Dead  so early in this 31 Days of Horror series, is this makes it subsequently almost impossible to take any zombie movie seriously – particularly a British one like this. It’s a bit like how Monty Python and the Holy Grail will forever be lurking in the back of my mind, for any other telling of Arthurian legend.

Now, there’s a good argument this is not a zombie film. Yes, the highly virulent infection turns its victims into mindless killing machines. But there is no indication it brings the dead back to life, and they don’t appear to eat their victims either. On the other hand, writer Alex Garland said, “I had an idea for a movie about running zombies… At the point I was working on 28 Days Later I had a lot of zombie movies as well as video games like Resident Evil turning round in my head.” Indeed, this and Resident Evil, also from 2002, were probably key in bringing the zombie genre back from the dead. It has so many of the tropes you’d expect, it likely doesn’t matter much whether or not its victims technically pass on before becoming “a bit bitey.” 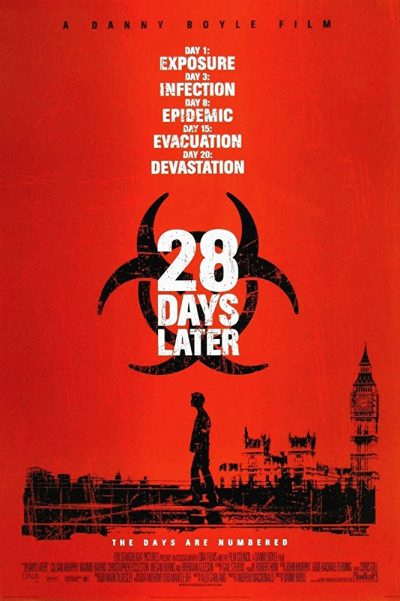 The main problem is the movie seems almost built backwards. The most memorable sequences are the opening, where bicycle courier Jim (Murphy) wakes up after a road accident to find first the hospital, then central London entirely devoid of other people. It’s brilliantly executed, Boyle blocking the cameras to maximize the desolation, while minimizing the amount of space he needed to clear of people. Jim eventually finds other survivors, notably Selena (Harris) plus taxi-driver Frank (Gleeson), and this section is decent, as they begin a perilous journey North, with an especially disturbing section crossing the Thames by tunnel.

They’re heading to a reputed safe haven in the North, and this is where the film goes off the rails. Sheesh, I mean: have these people never seen The Walking Dead? Any sanctuary advertising its existence is inevitably inhabited by people you do not want to be around, such as cannibals – or, in this case, incompetent and sex-starved soldiers, under the command of Doctor Who (Ecclestone). I say “incompetent”, because when Jim eventually decides to go Rambo in response to them creeping on Selena, a bike courier proves capable of defeating the best the British Army can throw at him in hand-to-hand combat. The whole “the military are the real zombies” thing isn’t exactly subtle, and was rather better handled in Romero’s Day of the Dead.

Given the unquestioned brilliance of the beginning, it feels a shame the movie didn’t stick to having Jim the sole resident of a deserted London. Admittedly, this would be a difficult movie to make, especially with regard to sustaining the audience’s interest in a story with one character. But it has been done: Julian Pölsler’s The Wall, from 2012, is along those lines, in the Austrian countryside. It’s an approach which would likely have avoided the rather jarring shifts in tone between the elements, that take away from the overall impact here.