Much though I loved Lord of the Rings, I’m somewhat sad that they came at the cost of the Jackson who gave us this. The last of his truly transgressive feature – next would be the far more subdued Heavenly Creatures – is a joy from beginning to end. Never has extreme violence been so thoroughly amusing, in significant part because the director never loses sight of the characters, as they wade, chest-deep, through the gore. 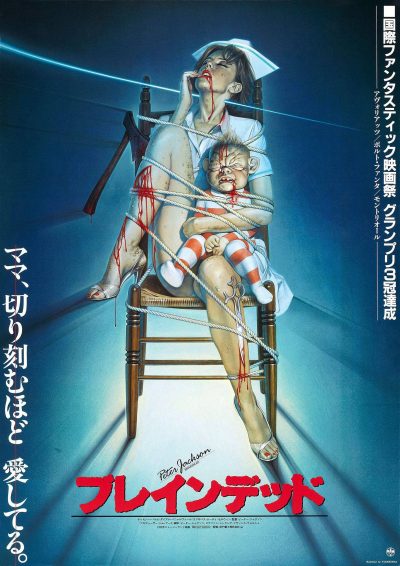 There’s Lionel (Balme), the milquetoast son of Vera (Moody), who falls for the lovely Paquita María Sánchez (Peñalver) – much to Vera’s disapproval. A zoo excursion, over which Mother is hovering, turns bloody when Vera is bitten by a Sumatran rat-monkey. It’s all downhill for her there, with even her death being only temporary. Before long, she’s back from the grave, and Lionel is forced to keep her – along with the increasing number of zombies she has spawned – in the basement. Uncle Les (Watkin) finds out, and blackmails Lionel into handing over his inheritance. This sets the stage for the bloodiest housewarming party of all time, when the basement is unable to hold its occupants any longer.

What’s key, is this would still be an entertaining and amusing comedy without the gore. The personalities are what make it so, in particular Vera. She’s glorious to watch, the very archetype of the domineering mother, sneeringly dismissing Paquita with lines such as, “I’ll tell you what she is. She’s experienced…” The idea that Lionel cannot escape from his mother’s influence, even after her death, is fodder for a whole psychiatry conference (and let’s not get into the meaning of the final rooftop confrontation, where Lionel undergoes what is basically a reverse Caesarean). I’m not sure why Jackson went for a fifties setting though: it doesn’t add much, and must have made production significantly more complicated.

This is a minor quibble, and as a combination of comedy and gore it’s near perfect. It’s not particularly “horror”, I must say. Despite the theme and content, it’s thoroughly lighthearted, with no sense of cruelty or sadism present – to the point the BBFC not only passed this uncut, they gave serious consideration to a ’15’ certificate. Which is remarkable, considering the sheer volume of blood sprayed around, especially in the amazing climax. Even a quarter-century later, Lionel chewing through the zombies with a lawnmower has never been matched, and it remains the gold standard against which all other gore is measured.

Yet, again, it’s not just blood for blood’s sake, the excess being combined with inventiveness and comic timing, worthy of Python at its peak. It’s this final element of Jackson’s talent I particularly mourn, lost with his transition to the fantasy genre for more than twenty years. Epic though some of his work there has been (if you’d told me in 1992 the creator of Braindead would win a Best Director Oscar, I’d have looked at you very doubtfully), I can’t help missing his obvious skills for “splatstick.” Still, even he would likely be hard-pushed to surpass or even match the remarkable standard set here.

If you’d predicted back in 1992 that Jackson would enter the third millennium spending $360m on Lord of the Rings, you might have been locked up. The boy’s done good. Looking at this one, you can perhaps just about tell, given the yearning for scale and the detachment from reality, though I imagine we probably won’t be seeing Gandalf going berserk with a lawnmower. This still remains the paint-the-walls-red goriest movie of all time, building beautifully from a slow opening which creates some great characters (Moody as the mother: “You know what she is: she’s experienced…”) up towards the final half-hour hell-bent on going gloriously over the top.

Criticisms? Sure: the period setting is irrelevant, save to justify some wobbly model trams, and the final monster fails miserably to get anywhere near the standards of the previous effects. But the spirit and inventiveness on view is wonderful, and it’s no wonder Jackson and Fran Walsh would be Oscar-nominated for their next script, Heavenly Creatures. Kung-fu priests, zombie babies, and more totally appalling things to do to the human body than you ever imagined possible.