Back in the day, The Exorcist was among the most notorious of films in Britain. For 14 years, it was refused any kind of officially-sanctioned home video release, while James ‘The Scissors’ Ferman held sway at the British Board of Film ‘Classification’. The man on the street might not have heard of Nightmares in a Damaged Brain, but along with Texas Chainsaw and The Evil Dead, The Exorcist was positively mainstream, as video nasties went. Eventually Ferman retired, wiser heads prevailed, and Friedkin’s horror classic was released. Inexplicably, Britain was not troubled by an epidemic of teenage girls sticking religious artifacts into their genitals. Who knew? 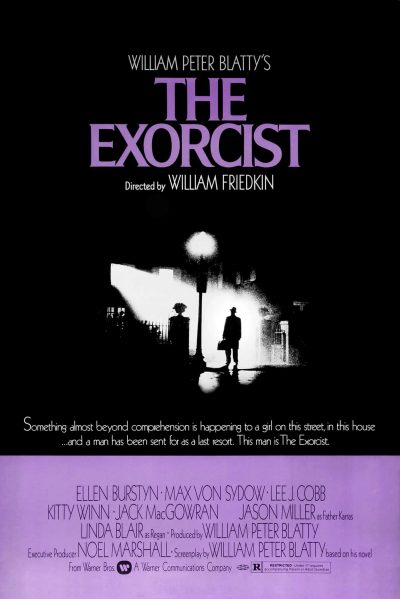 There’s no denying the enormous cultural impact this had in its day. Adjusting for inflation, this took over a billion dollars in 2018 money at the North American box-office. That’s the most by any R-rated film, and three times as much as the equivalent amount for any other R-rated horror. [I note four of the top six on that list are from the seventies, showing how mainstream the genre was in that decade, compared to now. We’ll get to most of the others later in the month] It works out at an estimated 110 million tickets, when the US population was only 212 million. Even now, it’s regularly nominated as the greatest horror movie of all-time.

Uh, really? Because it does little or nothing for me at all in that department. I certainly accept the quality of film-making involved, not least on the make-up front. Hell, never mind all the pea soup, Dick Smith deserved an Oscar for making Max Von Sydow, then in his early forties, look like he was ready for last rites as Father Lankester Merrin. Based solely on this movie, Von Sydow has been busting dead pools every year since. But to me, it’s not scary, amd barely slightly disturbing. A couple of chills when Regan (Blair) is speaking in tongues. That’s it. Given the main aims of any horror film are surely to rustle the jimmies of the viewer, and mine remained thoroughly unrustled, I find it hard to reconcile the movie and the plaudits.

Perhaps this is a result of my completely non-religious upbringing, resulting in a feeling that the entire saga of Regan’s supposed demonic possession is entirely implausible. I’d say “True” horror has to have an element of possibility, and even hockey-mask wearing serial killers seem more likely than the unexplained theo-babble offered here. [You’re a super-powerful demon and you possess a 12-year-old girl?] To me, it works much better as a drama, and Friedkin does well at meshing the multiple threads. The concern of mother Chris (Burstyn) for her sick daughter. The crisis of faith suffered by Father Damien Karras (Miller), following the decline and death of his mother. The detective investigating an inexplicable death. Each are strongly portrayed, even before Father Merrin shows up in the fog.

Then, to quote Monty Python, it all gets rather silly, eventually degenerating into Karras and Merrin repeatedly yelling, “The power of Christ compels you!”, as little Regan thrashes, moans and levitates. Maybe if you’ve a Catholic upbringing to prime the psychological pump. But to this disbeliever, the overwrought finale seems more like Papist nonsense. So are we sure this is supposed to be the greatest horror movie of all time? Or is that just by comparison to Exorcist II?