Coincidentally, the random selection of our list threw up two Stephen King adaptations back-to-back. After Creepshow, we turned the clock back to the first big-screen version of a King story, the rights for which he received the princely sum of $2,500. It’s the story of telekinetic teenage Carrie White (Spacek) and her tormenting by classmates, culminating in an especially cruel Prom Night prank, and her fiery revenge against them. Yet it’s also the conflict with her strictly religious mother (Laurie), who keeps Carrie all but imprisoned, both physically and mentally. 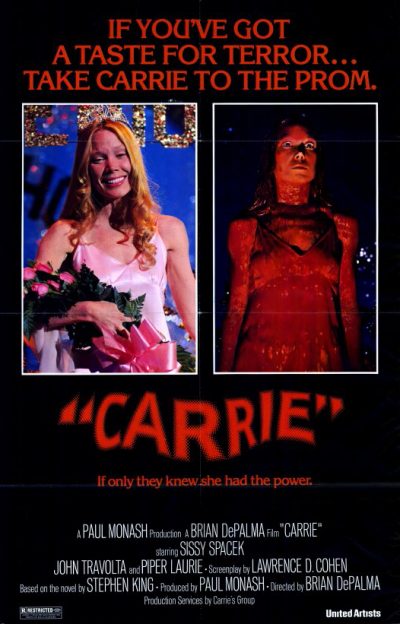 Though in the early going, I wondered if I’d made a terrible mistake and put on a David Hamilton soft-core flick. DePalma glides through the schoolgirl changing room and its teenage flesh to Spacek. She’s enthusiastically soaping her breasts in the shower, and not exactly looking like the 26-year-old she was. This is, of course, just a precursor to the trauma of Carrie entering womanhood, with her horrified reaction triggering the bullying of her peers. Yet that change also triggers her burgeoning powers, at first in little ways, such as flipping the principal’s ashtray after he repeatedly gets her name wrong.

Given this, it is a little strange how they don’t get set off by her mother’s far more rampant abuse, locking Carrie in a closet when she refuses to acknowledge her own “sin”. [Sidenote: I will now refer to breasts as ‘dirty pillows’] And, to be honest, once the set-up has been established, the middle of the film is kinda dull. The rest of the class are considerably less interesting than Carrie, generic teenagers despite including both John Travolta and Edie McClurg in early roles. Watching their mating habits and inane banter is considerably less interesting than the mother-daughter dynamic, on which DePalma should perhaps have focused. I’ll give a pass to Buckley as the only teacher who seems to give a damn: she knows something bad is brewing, yet can’t prove it sufficiently to take action.

The film rebounds impressively in the final reel, with the director pulling out all of his Hitchcockian tricks of suspense, then throwing a few more in for good measure. Split-screen? Check. Rampant camera movement? To the point almost of generating nausea in the viewer, as it swirls around Carrie and prom date Tommy (Katt). Gratuitous slow-motion? By the bucket. Dream sequence with shock ending? But of course! Forty years on, these techniques are perhaps a bit too familiar through overuse, yet you can’t deny the discomforting effectiveness to which they are put here.

Carrie is considerably more sympathetic here than in King’s book, where she’s less a martyr to teenage vindictiveness. This lends the ending additional poignancy, thanks mainly to Spacek’s performance, wise a decade beyond its supposed 16 years. Yet to my outsider’s eyes – there were no proms in my Scottish school, making the whole central concept here entirely alien – it feels as if the script both wants to be a high-school drama and skewer that genre. The resulting two halves never quite mesh to a solid whole in the way I hoped they should. Still sits satisfactorily in the upper tier of King adaptations, however.

And Carrie’s Mom turns out to be right: she should never have gone to the prom. So the moral is, just because you’re a loony fundamentalist, doesn’t necessarily make you wrong.