If you’re looking for a faith-based take on the zombie apocalypse, which also includes copious amounts of dressed but very noisy sex and necrophilia, I’ve got just the film for you. Quite why you would be looking for such a movie, I’m less sure: the makers clearly thought it filled a market niche. Proceedings begin with a small group of remarkably photogenic and entirely humanoid aliens from the planet Rathe, fleeing a religious war which is tearing their homeland apart. Not helping are the arrival there of the walking dead, resulting from a genetic mutation: it’s no longer just X and Y chromosomes, now there’s also Z. 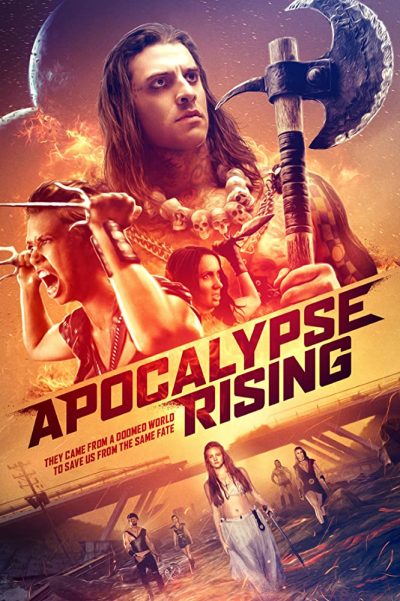 They arrive on Earth, in their disturbingly phallic rocket (above), in a late 21st century which looks exactly like the early 21st century, and all ready to mate. But wouldn’t you know it, a religious war is close to breaking out in the Middle East, foreshadowing the Biblical Armageddon. And there are also indications the same genetic mutation is close to bursting forth here too. As tensions rise, weirdness escalates, with portents and signs that the dead, rather than the meek, will inherit the Earth. But what is Jesus Christ, if not the original walking dead, rising from the grave after his crucifixion? [An early scene appears to depict Joseph encountering a zombie baby Jesus]. So perhaps through him, the world can be saved from the impending apocalypse – or more accurately apocalypseS, both conflict- and undead-themed. Oh, there’s also the Pope, who might be the Antichrist. And an archaeologist called India Jones (Luna).

It’s a really weird mix of elements. Some want to be taken seriously, like the depiction of Jesus Christ – he has a very solemn conversation with heroine Mia (Parker) while dangling on the cross, and there’s no doubt, he’s the son of God. But others appear very jokey, such as the Rathian costumes, which appear to be off-cuts from an episode of Hercules: The Legendary Journeys, particularly on muscle-bound Magnum (Samples). Then we have the frequent sex scenes, in which everyone keeps their clothes on, but get extremely vocal. One young lady even has energetic sex with a zombie and proclaims – I wrote this down – “Once you’ve had dead dick, you’ll never do the trick.” What? That doesn’t even make any sense. But add this to the small list of films which include zombie penis. Meanwhile, Mia is carrying around the severed head of her zombiefied father for advice.

This is the kind of berserk plotting which feels like it strayed in from a Hong Kong folklore movie. They’ll throw in everything including the kitchen sink, and let the viewer sort it out. Sadly, it’s not as much fun. The unevenness of tone comes over as jarring rather than endearing, especially when half the characters appear in on the joke, and the other half aren’t. It feels like it should be some kind of entry-level piss-take, yet the technical aspects are halfway decent, with Louisiana standing in for Israel, and can’t have been cheap. I wasn’t bored by this, admittedly. But being greatly confused, especially during an increasingly murky second half, isn’t an enormous amount better.