Oh, hey: an Alex Cox film! Ir’s been a long time since I’ve seen one of those. As in… thirty years? I think the last was either Walker or Straight to Hell, and those both came out in 1987.** Since then he has, according to Wikipedia, got himself blacklisted in Hollywood, been kicked off Fear & Loathing in Las Vegas, directed a bunch of “microfeatures” (including an adaptation of Robert Heinlein’s story, Bill, the Galactic Hero), made a documentary on the Emmanuelle movies, and taught film at the University of Colorado. So he’s been keeping busy. 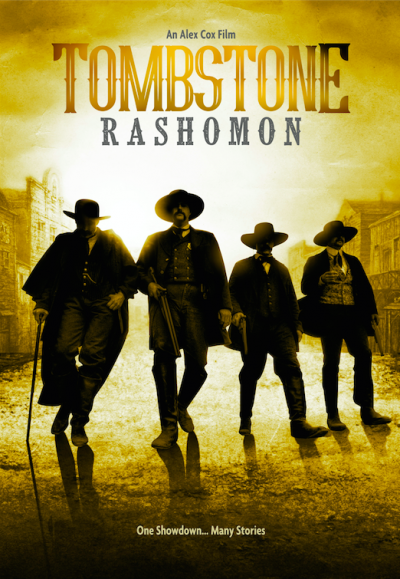 This is certainly different, as you’d expect from Cox. A time-travelling documentary film crew – a topic discarded with admirable casualness – go back to witness the gunfight at Tombstone’s OK Corral in 1881. However, they get there late, and can only interview the surviving participants, including Wyatt Earp (Newberry), local sheriff Johnny Behan (Pacheco) and Doc Holliday (Schumacher). Except, they don’t exactly agree on what happened, or the events leading up to the incident. Hence the “Rashomon” in the title, referring to Akira Kurosawa’s film of the same name, which told a story from a variety of perspectives.

It’s an excellent choice for this kind of exploration, and bonus points for filming in Tucson, close to the actual location of events. There’s no definitive account of the shoot-out, and it has a complex background in a slew of feuds and conflicts between the Earp brothers and the gang known as the Cowboys. Picking it all apart probably needs rather more than the brisk 83-minute running time here, and it does hit the ground running. You’ll be forgiven for early confusion, over the initial torrent of characters and their relationships. Yet it does eventually settle down to a rhythm, and you begin to see differences in the accounts, such as whether or not Behan told the Earps the Cowboys had been disarmed, in line with local Tombstone law.

Considering much of this is simply talking heads, it’s more entertaining than it sounds. All the actors manage to give their characters \life, though poor Schumacher draws the short straw – every portrayal of Holliday is inevitably going to be compared to Val Kilmer in Tombstone. We may have yelled “I’m your huckleberry” at the screen. Perhaps more than once. We also enjoyed Doidge’s performance as Doc’s common-law Hungarian wife, Kate, partly due to her cheerful misgendering calling everyone “her”. Though there are some interviewees who appear to be significantly unreliable narrators: not least when Holliday is shown as rolling up to the OK Corral in a police-car. [Cox embedded similar anachronisms in his previous neo-Western, Walker]

There are other momentary flash-forwards to the present day, for example showing tourists taking pictures at the cemetery where those killed on the day are buried. While it doesn’t all work, this is definitely not your typical Western. It’s a shame Cox currently has to resort to crowd-funding to get his movies made, and there are times the low budget means things occasionally look like a skit at a Western theme-park. I can’t help feeling the man behind Repo Man deserves better than to have to go around with his cap in hand, begging for donations. Still, the rights to that classic are due to revert to Cox later this year. If Richard Stanley can come back from the cinematic dead, maybe there’s hope for Alex yet.

The film is out now on DVD from TriCoast Worldwide.

** – Steve reminded me about Cox’s Repo Chick, which I did actually see in 2013. I just wish I hadn’t. Best for all concerned if we forget that even exists.