Approaching a quarter of a century ago, Richard Stanley was fired, a week into shooting The Island of Dr. Moreau. He quit Hollywood, moved to France and became an expert on the Holy Grail and other occult topics. His cinematic output since consisted of a couple of documentaries and some short films, but he has finally returned, to make the biggest-budget adaptation of H.P. Lovecraft ever. Ok, we’re actually still talking fairly small: only $12 million. But Stanley does get every penny out of that, and the first hour – before it turns into a bad acid-trip – is among the most unsettling example of cinema you’ll see. Plus, you get Nicolas Cage losing his shit, which is always worth watching in my book. 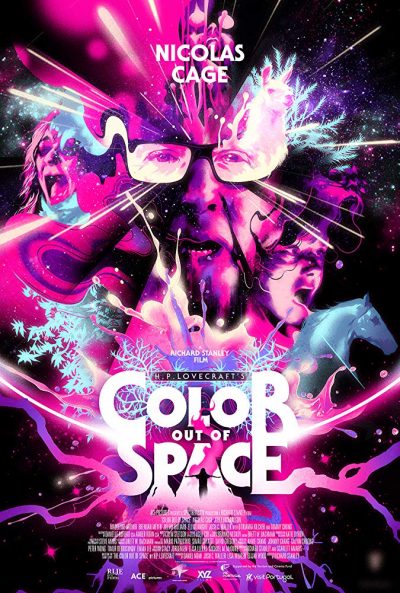 Cage plays happy family man Nathan Gardner who has moved to the farm owned by his late father, accompanied by his stockbroker wife, Theresa (Richardson), and their three kids. This fairly idyllic life is upended one night, when a bizarre meteorite lands in their back yard, before apparently evaporating. Keyword: apparently. Because this is when the weird stuff begins, with the space-rock contaminating the water supply on which the family relies, and thereby infecting the local flora and fauna, including the Gardners. Everyone’s behaviour becomes increasingly erratic. Yet that is only the start, as the impact on the family moves from the mental to the physical. This begins with little things like a rash on the arms, but ends up at WhatTheFuckIsThatIDon’tEven.

There’s no doubt the effects are impressive: very much in line with John Carpenter’s The Thing, flesh (both human and, probably more disturbingly, alpaca) becoming a malleable, clay-like substance with which the film-maker can toy. Stanley has a fine handle on the sense of looming dread, which feels a little like the early going in Signs, with a rural family troubled by increasingly bizarre, extra-terrestrial occurrences. However, dread can only take you so far, and Stanley seems to forget much of what has gone before, in lieu of a visually intense but emotionally deficient conclusion.

For example, much is made early on of the Wiccan tendencies of daughter Lavinia (Arthur). These are apparently there just because Stanley is a bit Wiccan himself, and are of no relevance. The same goes for Tommy Chong’s extended cameo as, and this is my unsurprised face, a drugged-out hippie. It’s never quite clear if there’s any intelligence at play behind the alien force; if it has an agenda, I couldn’t tell you what it was. Still, it’s probably about as good as you are going to get in terms of adapting the work of Lovecraft, considering anything truly accurate would need to turn its audience into gibbering madmen. Having got through the filming of this without suffering a similar fate – unlike Moreau – Stanley has already announced plans to follow this up with another helping of HP sauce, The Dunwich Horror. I, for one, welcome our new eldritch overlords.