Is it possible for a film to be too good, technically? This one might be. For it is such a technological marvel – made to look, bar one pause, like it was filmed in one take – that we often found ourselves taken out of the moment. Rather than connecting with the characters and their situation, we were instead often wondering how this shot was filmed, or if we’d just gone through one of the near-seamless joins. Make no mistake, it’s amazing to watch, and you can only admire the work behind it. It’s truly what cinema should be about, showing you things you could never experience otherwise. And, yet… It feels more like an exercise in technique, albeit a glorious one. 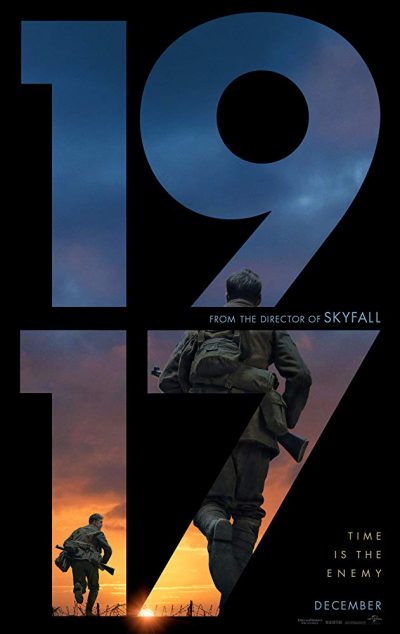 Events unfold in near real-time over one night in April 1917. Two young soldiers, Tom Blake (Chapman) and Will Schofield (MacKay) are dispatched on an essential but highly hazardous mission. They are to cross no-man’s land and deliver a message to the Second Battalion of the Devonshire Regiment, whose planned attack the next morning will actually be walking directly into a German trap. Getting there will require them to deal with booby-traps, collapsing bunkers, snipers, enemy pilots, and an exhausting, steady stream of other threats. It’s all fairly exhausting for the viewer as well, with pauses to catch your breath seeming few and far between.

That’s not a bad thing, though, and unquestionably gives an insight into life during wartime, where your life could be ended at, literally, any second. You’ll certainly leave with a better understanding of PTSD. Roger Deakins’s cinematography is outstanding: not just for the one-take thing (though that alone should make him a cert for the Oscar), but for capturing the hellish landscape of the First World War. There are also times, such as the scenes lit by the raging inferno of a town, where there’s an eerie beauty to it all, quite at odds with the unflinching depiction of death and destruction, on which the film certainly doesn’t skimp. However, I can’t say it was as effective at pushing my emotional buttons. At moments, the camera motion, either running ahead or following behind the characters, felt like you were watching them in a third-person shooter: Call of Duty – Not-so Modern Warfare.

Oh, Blake and Schofield are likeable enough, with glimpses of their personalities shining through during the brief moments when they’re not too busy dodging imminent death in some way. But there feels a pointlessness to all of their efforts, though this is quite likely deliberate. They’re saving a relative few, in a war where, a few months earlier, the British Army had lost close to twenty thousand men in the Battle of the Somme, on a single day. And while delivering their orders in time will rescue the battalion, it’s likely only to be a temporary reprieve. As one character says,  “Maybe next week, the commanders send  a different message: attack at dawn. There is only one way this war ends. Last man standing.”