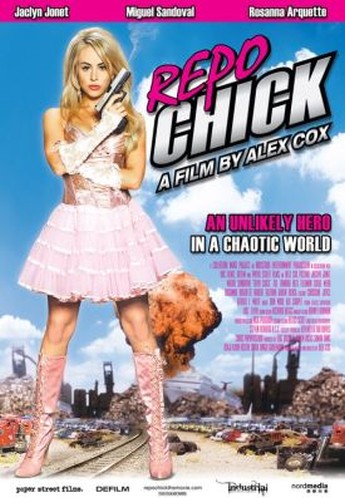 Dear God, this is awful. It’s only extremely loosely connected to Repo Man, not least because Universal and Cox both own the rights, and neither can make a sequel without the other’s permission: this got the director a cease and desist, which he ignored. More’s the pity, unfortunately, because this is like listening to 90 minutes of Occupy Wherever shrieking: mean-spirited class-war propaganda, without a single likeable or even plausible character. It’s the last issue where it is most obviously distinct from its predecessor, which was full of endearing oddballs. Here, instead of Emilio Estevez, you get Jonet, playing Pixxi De La Chasse, a waste of space heiress who is disinherited, and forced to get a job – which ends up being in repossession, the only growth industry. She sets her sights on a missing train, but when she finds it, discovers it has already been hijacked by a group of ecoterrorists whose main goal is to ban golf. Can she get the train back, reconciile with her family and save Los Angeles [not necessarily in that order].

Unfolding largely in front of green screens, with occasional, deliberately poor model-work thrown it, this feels like the kind of thing a politically-conscious 14-year-old would make, with special effects by a younger sibling. It wears its welcome out incredibly fast, and does precious little to redeem itself the rest of the way. It’s clear what Cox is trying to do: make a scathing, absurdist satire of modern culture, its obsessions with empty fame and style over substance. Except, the entire movie becomes exactly that. It turns into an object exercise in flogging a cinematic dead horse: absurdist, certainly, but never achieves the slightest degree of significant bite on its target, mostly because they’re neither too obvious and easy to merit anyone’s serious attention. Apparently, Cox had dropped off the grid and was living somewhere on an Oregon farm. Seems like any talent he had dropped off the grid rather more successfully.