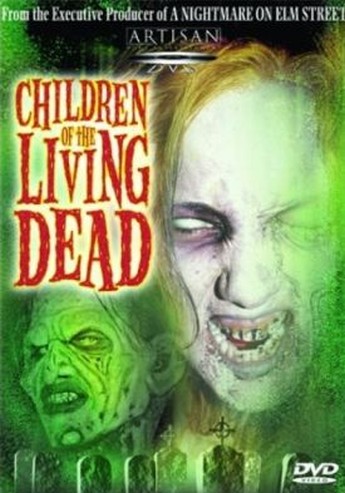 Let’s be clear. I do not use the term “worst movie ever” lightly. But if you’re talking about films made in the current millennium, then the conversation definitely needs to include this 2001 stinker. There are not many films where the director wrote to someone who penned a bad review, “I am writing to you to offer my sincerest apology for the 90 minutes of your life wasted watching the movie Children of the Living Dead… It really does suck.” There’s a whole sorry saga behind that email, which (if true – always a good caveat when you get one side of a story) is a cautionary tale on the perils of low-budget cinema, and how the best intentions can be driven ashore on the rocks of ego. Here, it seems to have been the writer who took over the picture, completely re-edited it, replaced most of the dialogue during post-sync, in a largely failed effort to make sense, and for good measure, re-arranaged a few scenes. Not that Ramsey can escape criticism, given scenese like the one where the hero goes to a diner for breakfast, is served a cup of coffee, which the waitress then refills twice without him even picking it up, and he then leaves without ordering anything or paying for the coffee.

The plot? Oh, god: the plot… It starts with a zombie outbreak, through which Tom Savini rambles, blowing zeds away with some panache – though no actual gore. He is eventually eaten by the reincarnated corpse of mass murderer Abbot Hayes (Morland), whose mother used to dress him up as a girl, and who was supposedly killed in prison, although his corpse vanished. 14 years later, a group of local kids are on their way to a concert, when Hayes makes them drive their van over a cliff. Their bodies disappear before they can be buried. A further year later, and Matthew Micheals (Luvara) is in the area, preparing the way for his father to open a used-car dealership on the site of both Hayes’ farm and the local cemetery. So that’s almost an hour into the film before the actual meat of the storyline clicks in: and it really doesn’t have much to do with the original zombie outbreak, or the death of the teens, who are presumably the titular children. The bottom line is, desecrating graves for commercial gain is never a good idea. But you already know that, if you saw Poltergeist.

It’s hard to be sure exactly why this fails in so many ways, and so disastrously. Certainly, Ramsey’s explanation makes a lot of sense, but it also seems that the script was horribly underthought. It starts off playing like a sequel to Night of the Living Dead (and the presence of John Russo as a producer supports this), but this aspect is all but discarded after 20 minutes. Nothing after that point makes any sense, either in the real world, or the fictional universe in which the film operates, and that’s less forgiveable than the limited technical aspects. However, even a $500,000 budget should look, sound and play an awful lot better than this wretched excuse for a movie – and that’s making significant allowance for post-production tampering by a disgruntled writer.