They’re back. The question is: why am I? Because after the abomination which was Corona Zombies, I had serious doubt about inflicting on my senses, a second installment of redubbed footage from other movies, hijacked reality footage and the adventures of a pair of vacuous bimbos. And, yet… I have to admit, I was amused. Perhaps it’s that the topic this time is a certain Netflix road-crash docuseries, which fits the approach better than a disease which is no longer quite the laughing matter it might have seemed at the time of the original film. 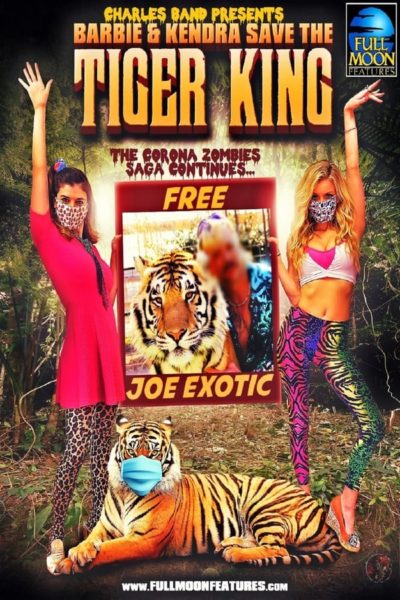 We still have Barbie (Cameron) and Kendra (Sydney), now holed up in their apartment, where Kendra, a big Joe Exotic fan, is watching “The Great Catsby”, a dramatization of Joe’s early life on the Big Pussy Network. This consists of redubbed footage from two 1968 rainforest movies: Terror in the Jungle (one of whose directors was Tom DeSimone, of Reform School Girls fame) and Luana, the Girl Tarzan. The plot there, is that a plane carrying the young Joe crashed in the Amazon, and his father had to go in to try and rescue him before he could sacrificed by the local tribesman.

It’s every bit as daft as it sounds, yet it works rather better than Zombies. There are some actual jokes here, and Jordan is a hoot as the voice of the young Joe Exotic. I genuinely laughed out loud at one point, when the explorers are almost taken out by a jungle trap, and proclaim “My god! It’s a piñata shaped like the coronavirus! These headhunters certainly have a sick sense of humour.” Which is probably as close to an apology as you’re going to get from Band, for previously joking about a pandemic which has now killed over 200,000 people in the United States.

What succeeds is the Barbie and Kendra dynamic. Having them in the same place, as opposed to the previous film, where they only spoke on the phone, is a distinct improvement. They play off each other in a way that’s quite amusing in its deadpan idiocy. They even interview Reinke, one of the saner members of the Tiger King entourage, over Zoom, while staying in character, and it’s genuinely entertaining. I would actually watch a Barbie and Kendra talk-show, especially if the celebrities weren’t in on the joke. It could be like a Valley Girl version of Ali G. Charlie, let’s do lunch…

There are still chunks which come off as flat, and even at less than 70 minutes, it does struggle to fill the running-time evenly. Yet it’s considerably more sustained than Zombies, and works better as a result. No-one is going to mistake this for the Marx Brothers; indeed, it still only marginally qualifies as a “real” film. Yet, at the end, we’re told part three is on the way: Barbie & Kendra in Space Force though, as below,  looks like it will actually be Barbie & Kendra storm Area 51. And I was surprised to find myself genuinely looking forward to this…