It has been interesting to see how film-makers have reacted to the quarantine shutdown. Some have gone for full-blown exploitation of the pandemic, while others have sought tricks to work around the limitations resulting from nobody being able to leave their home. The latter approach leads to films like this, which comes over – quite deliberately – like a playlist of YouTube videos, made by a selection of vloggers. They each receive the package of the title, whose contents vary from the weird to the gruesome, though each contains a deliciously old-school VHS tape with no label. Playing it, as everyone naturally does, appears to depict some kind of sacrificial ceremony. It becomes clear that the impact on the lives of those who watch it is not limited to their psyches, with each viewer becoming increasingly plagued by real-world terrors. 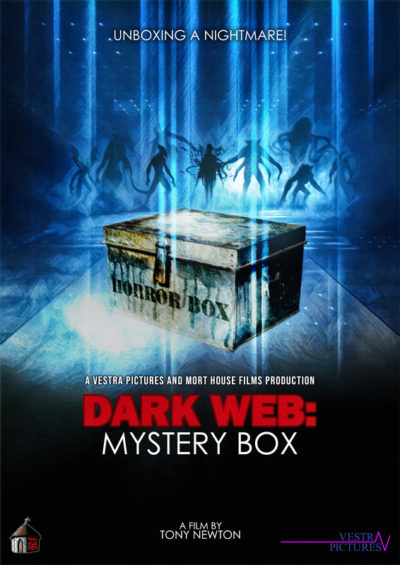 The structure removes the need for interaction between the characters, as each is an individual, save for a husband and wife pair of horror fans (played by real-life husband and wife, Sarah and Josh Schultz). This means the participants tend to operate in their own “echo chamber”, without the benefit of input from anyone else. The only real bit of interactivity, is one sequence where the screen divides into four: one corner plays the mystery tape, while the other three show the watchers and their reactions.

Likely as a result, it does become a bit repetitive. There are five separate recipients, and that’s probably two or three too many. While their characters are certainly a range of online “celebrities”, from the horoscope lady whose positivity gets burst like a soap-bubble, through to the (probably inevitable!) conspiracy dude, there’s probably not enough variety in responses or how things unfold after their viewing. Narrowing the focus down could have provided more opportunity for development of each story. The “rules” of the game would surely also have permitted some cross-discussion, with the characters connecting with and talking to each other about their situations. Or does no-one in this universe have Zoom?

But given the limitations of the form, and especially once you get past a rather slow first half-hour, this certainly has its effective moments. It becomes easy to forget that you are watching actors playing vloggers, to the point that I wonder how much they were simply being themselves – or at least (and being kinder in some cases!), enhanced versions of themselves. Regardless, we found ourselves genuinely concerned for their well-being, as their sanity was chipped away. It would probably benefit from a bit more of a climax, as the film ends, rather than finishing. Yet it still proved an effective reinforcement of my doubts about the potential evil which lurks online.

For a while I was initially inclined to snort derisively, the idea of receiving mysterious packages from the “dark web” is not one made up by the film-makers. According to Mashable, one box included “children’s clothing, a phone with pictures of an abandoned building, dolls containing human hair and teeth, pictures of different children inside a pop-up book, objects with satanic imagery, bottles that have different numbers painted on them, and a thumb drive.” And that’s quite enough Internet for me today, I think.