I was curious to see how a movie version of this beloved Japanese TV show would work. The answer is… Not particularly differently. Indeed, despite its two-hour running time, this might as well be four episodes of the series combined. We do get to see a little bit more – in particular, what the Master does when he’s not running his Shinjuku diner [I always thought he lived above the shop: turns out that’s not the case], and even some acknowledgement of events in the outside world. But if you’re expecting anything cinematic, or revelations about the origin of the Master’s scar, you’re going to be disappointed, because Matsuoka seems resolutely intent on playing it safe. If you like the series, you are probably going to like the movie – and for the same reasons. 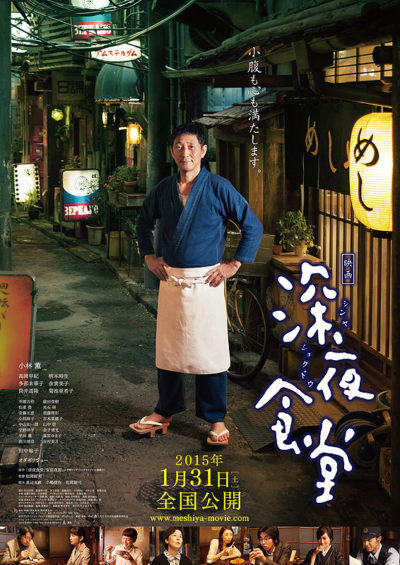 We get four tales about the Master (Kobayashi), and the customers that come into his little restaurant. The first is a slight entity, about a “kept woman”, Tamako (Takaoka), who has been thrown down on her luck, after the death of her sugar daddy. It ends before it has achieved much impact.  The second sees the Master dealing with a homeless girl, Michiru (Tabe), who does a “dine and dash” only to be subsequently overcome with guilt. He sees potential in her honesty, and takes Michiru under his wing, helping her rebuild a life. The third story sees a refugee from Fukushima (Tsutsui), who lost his wife in the tsunami, come to Tokyo in search of a rescue worker for whom he has developed feelings, who may not share them. And wrapping around these, is an urn of funeral ashes left in the diner. This apparently happens quite a lot, because the prices for burial plots in Japan are sky-high. Who knew?

The strength remains the excellent performances, in particular Kobayashi, whose stoic good-nature provides the moral glue which holds everything together. You get the sense he may have seen the worst in people over the years, yet still seems to believe in their innate goodness, which is quite heart-warming. The second story is probably the best, not least because, for once, the Master is at the center of proceedings – he’s usually the one holding the coats, so to speak. Though I was a little weirded out by how the subtitles on the Hong Kong DVD suddenly switched into Scottish brogue for a bit. I eventually figured out it was an attempt to convey Michiru’s rural origins, far from Tokyo. Credit for the thought, rather than the execution.

While all the stories are still worthwhile, and fans of the show will enjoy the little nods paying homage to what they have already seen, it feels as if this is a case where less is more. The lack of a fixed running-time may have given the creators greater freedom, but this seems to have simply led them to meander about. The Fukushima chapter, in particular, feels like it could have been told in half the time, with little or no reduction in impact. If I’d paid theatrical prices for this, I might have been slightly annoyed at being left still hungry.