I don’t know why they didn’t call this, Midnight Diner: Second Helpings. But, I suppose, that would be rather too crass and obvious for a show which is the epitome of subtle and understated. As with its predecessor, it feels rather more like multiple episodes of the television show packaged into an omnibus edition, rather than being a specific cinematic entity. However, I’ve come to the conclusion that’s not necessarily a bad thing. It’d be, to use an appropriate metaphor, like the chef of a favourite restaurant changing his recipes after opening an extension to the premises. 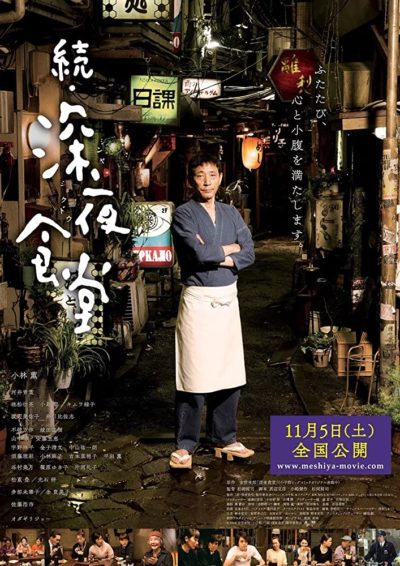 So, what we get here are three stories, with a vaguely funereal theme – it begins with the “regulars” at the titular establishment congregating and discovering they have all been to various funerals and wakes. That is, except for Noriko (Kawai), a publishing house editor who dresses like she has been to a funeral, because she enjoys the reactions it provides. [The bar’s resident pervert proclaims, “Men can’t resist a woman in mourning”] However, after she has to attend a genuine funeral, she meets a man who is interested in more that funeral weeds. Or is he? The second segment concerns Seiko (Kimuta), owner of a nearby restaurant and her struggles with her son, who is seeking his own way. He doesn’t want to follow in the family business, and his girlfriend is an older woman, whom his mother refuses point-blank to meet. Except, little does Seiko know, she’s already friends with her son’s intended.

The third and final entry was, for me, the most successful. It illustrates one of the central tenets of the series: that people are basically good, and will help each other when needed. The beneficiary is Yukiko, an elderly woman who travels to Tokyo after falling for a scam, handing over two million yen to her supposed son’s employer. Except, does she really have a son, or is this a symptom of dementia? Because, she seems to know very little about her child. Still, the customers of Master’s restaurant rally round to help – not least, Michiru, who sees a chance to “pay it forward”, after Master helped her in the previous movie. This section does a beautiful job of being warm-hearted, without toppling over into sentimentality.

The Master (Kobayashi) does perhaps take a bit more of a back seat than in the first film. But he remains the glue who holds things together, overseeing the customers in a way that’s no-nonsense, yet welcoming [I suspect good reason exists why there is never even the slightest inkling of trouble, despite its late hours of operation – even when the Yakuza boss isn’t in the place]. It’s the kind of place I wish existed around the corner from Film Blitz Towers. Though if it did, I’m not sure I’d get much sleep, since we’d probably be in there, every night, from midnight until 7 am… Now, if you’ll excuse me, I have a craving for noodles.