This is the kind of movie which is largely review-proof, because it wholeheartedly embraces its own shittiness. You could point out the amateur performances, the D-grade effects, and the completely ludicrous plot. The film’s reaction would probably be to turn up its collar, take a long drag from an unfiltered cigarette, and reply, with a sneer, “Yeah. So?” Does this self-awareness excuse those flaws? To a certain extent – though perhaps not as much as the film wants to think. The frequent repetition of the film’s title, sure: that’s part of the joke. Scenes which appear to be lit with a dollar-store torch? Not so much. 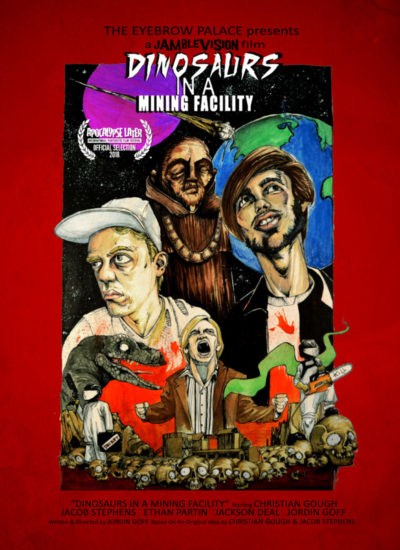 The central premise is… Well, the title. It’s run by WAMO, an evil corporation who are working on a plan to unlock a portal to planet Tyranus. Under Dr. Henry Stone (Goff), they intend to use the blood of its reptilian inhabitants, to make a mind-controlling energy drink, with which they can rule the world. As you do. Against them stand new WAMO employee, Ian (Gough) and renegade, chainsaw wielding enforcer, Jonny Anaconda (Stephens). To defeat the threat, our heroes will have to go through the portal to Tyranus, and face a large number of dinosaurs. Ones that are no longer…. in a mining facility.

This runs a brief 72 minutes, and that includes the lengthy closing credits, needed for all the Creative Commons elements used in the production, from sound effects to the dinosaurs themselves. It still occasionally feels too long, with some scenes that don’t serve much purpose. Though I will admit, one in a bar which felt that way, eventually paid off in a truly dreadful, “We don’t serve miners here” line. I LOL’d. The performances are a similarly mixed bag. Gough’s whining gets old, fast, but Stephens has a loose charm, that’s all the better for being relatively underplayed. Goff does a good job of capturing the “mad scientist” vibe, channeling his inner Thomas Dolby. He also plays Ian’s mother in a flashback. This illustrates the “by any means necessary” approach taken by the film-makers – almost as much as the end credit which informs us this took close to five years to make.

Only if you can accept the movie in that spirit, will this be bearable. By any objective standpoint, it isn’t “good”. Even if you compare this to a SyFy Original movie of the least impressive kind, it’s probably going to be found wanting in many areas. However, as an entity put together by a guy who taught himself everything he needed to know to make a feature film, much of it from YouTube videos, it’s a sterling testament to what can be accomplished by persistence of near-obsessive level. As such, it can only be admired. I’ve certainly seen less entertaining movies, put together with far more money and by people who do this as their day job, and that’s what matters. Resources and experience? They’re clearly vastly over-rated…