Well, I have to admire the ambition here. With almost no resources, Bickel has made a trans-dimensional apocalypse movie, packed with drug trips and occult weirdness, as well as copious amounts of intestines, shotgun blasts and nudity. It’s just unfortunate that the end result is likely something which requires a large quantity of mind-altering substances to appreciate fully. If David Lynch, Hunter S. Thompson and 80’s era Alex Cox had a baby, it might have looked something like this. Albeit only if they aborted it in the third month.

Gayce (Donofrio) is a drug-dealer, roaming the night life in a weird city, pushing a drug called “Theta”. This triggers collective hallucinations in those who take it, bringing them into contact with a birdlike entity (Gonzalez) with apparently the ability to trigger the apocalypse. When Gayce’s homeless pal turns up very dead – just the first in a series of bloody victims – Gayce and her supplier, Derek (Dove), try to find out who’s beyond the killings. Is it the Santa and Mrs. Claus-like manufacturers of Theta? The Bible-bashers, led by Brother Marcus (Silman) dosed with the drug as a prank by a barman, who have apparently gone full Manson as a result? 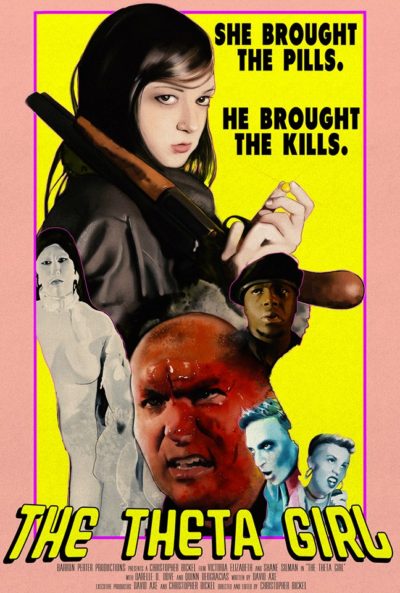 The first twenty minutes are excruciatingly bad, filled with shitty punk bands playing their shitty music in a shitty venue. I also sense the soundtrack was chosen to get as many of the director’s mates in as possible, rather than to enhance the movie’s atmosphere. The same could be said of elements such as the orgy scene, which serves no apparent purpose. Fortunately, it doesn’t continue in that vein, but don’t expect anything resembling a coherent plot ever to turn up. Instead, you get scenes like Derek having a conversation with the entity, which has adopted the form of a porch swing. You may want to read that sentence again. Slowly.

It’s at its best elsewhere, when following Gayce on her vengeance driven crusade through the underbelly of the city. Even if sense remains out of reach, there’s still the feeling of a lot at stake, one side seeking to prevent the apocalypse and the other trying to bring it on. Yet here, the lack of any clear rules or purpose still make it difficult to hang any emotional impact. The movie ends, more or less, when stuff stops happening. A definite conclusion remains as out of reach as that coherent plot.

The end credits remind us, “The Theta Girl was produced for the price of a used car by complete novices,” and sometimes, that shows. Bickel does have a good eye for the visual, with sequences like the trip to the entity’s plane of existence, effectively trippy. The sound, however, is frequently terrible, distorted to the point of inaudible. Still, as the credits also say: “No excuses. MAKE YOUR OWN FUCKING MOVIE.” The people here did, and should be applauded for that. This doesn’t mean there isn’t enormous room for improvement.