Haven’t we been here before? Does nobody learn anything from history? For once again, Western archaeologists are plundering Egyptian tombs, and bringing their loot back to blighty. What could possibly go wrong? I mean, you’d think they’d have got a clue, in the presence of Hammer’s stock Arab George Pastell (born in Cyprus, easily close enough for sixties cinema work), more or less reprising his role of “Dire warning guy” from its predecessor. Admittedly, he’s not controlling the mummy here, but is still making ominous pronouncements, such as, “The consequences of the actions you contemplate must rest upon your own head.” When will anyone ever listen? The presence of a brown-faced Michael Ripper among the locals is another clear sign something is up.

However, I guess mummy films as a genre, are almost entirely dependent on all of the characters paying absolutely no attention to ill omens, prophecies or dire warnings. The audience, of course, knows better, and when American showman Alexander King (Clark) reacts to stories of the curse with “There’s thousands of dollars of free publicity in that,” you know it’s only going to be a matter of time before he discovers otherwise. It’s a shame when he does, as he’s about the only character of note in the film. Well, at least in a positive way. The film’s bit of Eurototty, Annette Dubois (Roland, who’d go on to massage Sean Connery, in You Only Live Twice) is particularly and whorily irritating, barely bothering to mourn after the corpse of her dead father – minus a chopped-off hand – is dumped in front of her. 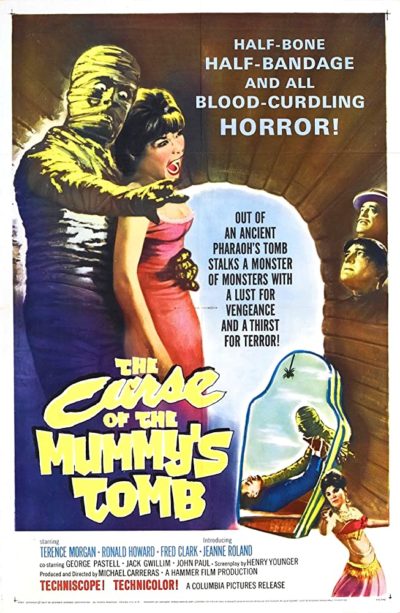 A scant few minutes of screen time later, and she’s making eyes at the mysterious and creepy Adam Beauchamp (Morgan) on the boat back to England, despite supposedly being in a relationship with milquetoast Egyptologist John Bray (Howard). He’s only in charge because previous incumbent Sir Giles Dalrymple (Jack Gwillim) got snotty over King’s plans to market the relics, and is now drinking himself to death. Everyone here is so unsympathetic, I was quickly finding myself on #TeamMummy. And, as mentioned in my original review (below), I’m a big fan of the creature here, which has all the inevitability of a glacier. Sure, it’s not Christopher Lee, who could emote perfectly well with his eyes. Yet, in this case, a lack of emotion works perfectly well, and is arguably even more chilling.

It had been just over five years since The Mummy had come out, when this was released, as the bottom-half of a Hammer double-bill, in support of The Gorgon. If it had been five years since I’d seen its predecessor, that might well have helped. Instead, it has been less than six months, and consequently, everything here feels too familiar, down to the extended flashback to ancient Egypt, to tell us how the mummy came to be. Outside of the monster, most of the cast seem like soy versions of characters from the previous movie: they look similar, but possess none of the necessary flavour.  While the story does offer a couple of fresh elements, King’s showmanship is quickly eliminated, and not enough is made of Beauchamp’s background, wasting what could have been a very interesting plot thread.

This illustrates one of the main problem with Hammer’s “franchises”, in that most of them don’t really operate as sequels, by which I mean movies which build on the events of the previous films. Perhaps the relatively long gap between entries plays into this, but they tend to succeed or fail, purely on their merits as standalone movies. Sometimes, that’s fine: you don’t need to have seen the previous Dracula or Frankenstein films to appreciate Cushing and Lee. But then there are cases like this, where it’s probably better not to have seen the preceding film, since it took most of the same elements and combined them to superior effect. This definitely does little to dissuade me from a belief that mummies are easily the least impressive of the “classic” horror monster. 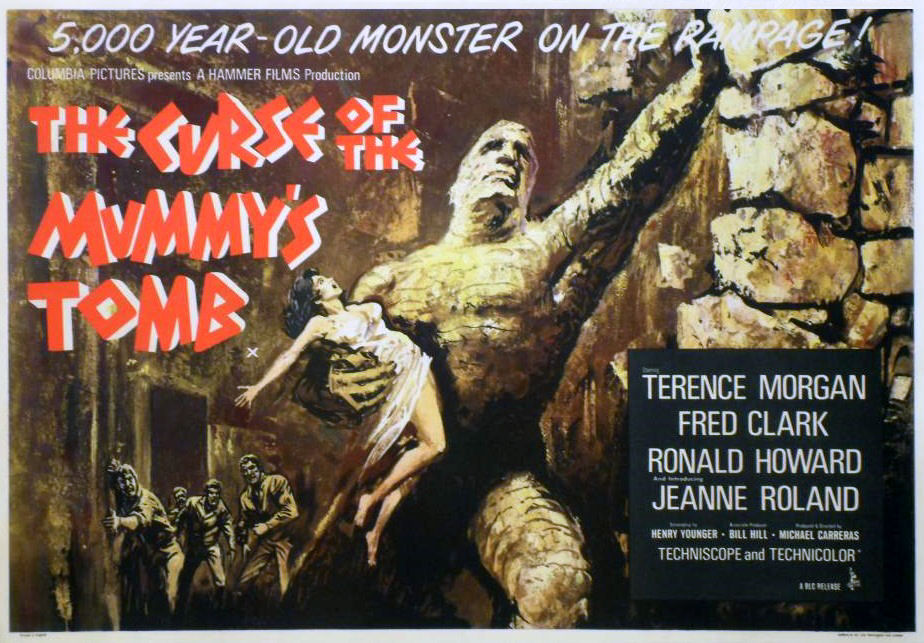 Studio head Carreras usually left directing to his minions, but was at the helm for this one, which follows much the same vein as its predecessor, The Mummy. A tomb is disturbed by Egyptologists, dismissing tales of a curse, only to find, after they return to England, that vengeance wears bandages. John Bray (Howard) and his fiancee Annette Dubois (Roland) are the scholars, with Fred Clark playing expedition funder and American showman Alexander King. The last-named intends to turn the mummy of Ra, who was killed by his brother, and the other relics they retrieved, into a travelling sideshow – which does not sit well with the locals. Then there’s Adam Beauchamp (Morgan), an independently-wealthy fan of the subject, who befriends the team, as they work on setting up the exhibition for its debut in London. Unfortunately, when King cracks open the sarcophagus on the debut night, he’s in for a bit of a shock…

Though there are are few of the Hammer regulars on-screen here – blink and you’ll miss Michael Ripper – this is a slight upgrade over its predecessor, even if it’s never less than entirely obvious where the script is going. If you can’t tell who the villain is going to be almost as soon as they show up, you must have been entombed somewhere for a few thousand years yourself. However, it has some surprisingly graphic (for the era) limb-chopping and implied head-squashing, and that’s a particular shock, with the atmosphere here feeling like something made in the forties, rather than mid 60’s. As before, the set-up is likely overlong, and the film only kicks in when the rampaging starts. However, a big plus is the mummy itself. This time round, as played by Dickie Owen, it provides a much more imposing figure than the tatty one portrayed by Lee previously: it looks like it’s made of solid concrete, and could do you real damage. The genuine sense of menace resulting, is certainly an improvement. Rating: C+