This takes the legend of the gorgon – I’m sure you all know of her, Greek mythology, hair of snakes, turns people to stone with a gaze, Perseus killed her using his shield as a mirror – and moves it into turn of the century middle-Europe, where it seems something is doing the whole petrification thing again. After losing his brother and father to whatever it is in just one week, Paul Heitz (Pasco) travels to the village where it happened to investigate, only to be stonewalled by the authorities. He meets Dr. Namaroff (Cushing), the man in charge of the local institution, and falls for his lovely assistant, Carla (Shelley). But Paul also encounters the creature responsible for the deaths, surviving the encounter thanks to only glimpsing her reflection in a pool. For assistance, Paul’s mentor, Professor Meister (Lee) joins him, and they also seek to rescue Carla, who seems reluctant to leave town for some reason. Particularly during the full-moon.

Rarely have I felt the feeling of such total disappointment, experienced on finally seeing the monster. By coincidence, after finishing this, we bumped into Clash of the Titans – the old one – and saw Ray Harryhausen’s infinitely-superior stop-motion gorgon. In contrast, this looks like a bad Halloween costume, and needless to say, damages the impact disastrously, since it’s been built up as the ultimate monster, whose appearance is enough to kill. The only way this gorgon would do so, is if the target were to split their sides laughing. We were additionally disappointed to discover that, despite “starring” Lee and Cushing, they have one exactly scene opposite each other, with the former barely in the first half at all. While they are their usual reliable selves, of course, they only show up Pasco as a bland, uninteresting hero. The script doesn’t seem to know what to do, either; ok, we’ve got a monster. Now, what? The cinematography looks as pretty as ever, and Shelley gives great hair: it’s not enough to lift this up, and is more proof that Hammer’s strength lay when they avoided the need for effects as much as possible. 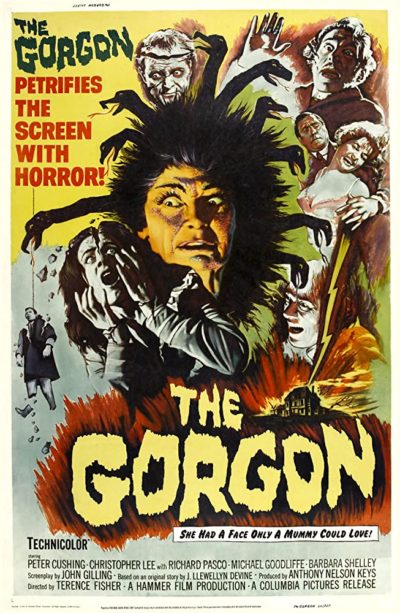 Interesting to discover that this film started off, literally, as fan fiction. John Gilling’s script was based on a synopsis submitted to the studio by a fan in Canada, J. Llewellyn Divine, who seems to have left no footprint in the film industry beyond that. I’d say this was a good candidate for a remake. I always think the movies which get recycled shouldn’t be the classics, but ones where there is room for improvement. And, boy, is there room for improvement on the effects. As Lee later declared, “The only thing wrong with The Gorgon is the Gorgon.” Even though Shelley was willing to wear a headpiece filled with live snakes, the studio demurred, and went with a remote-controlled set of fake snakes, which are not in any way convincing. The decision to have her cloaked in shadows for almost the entire movie, seems less an artistic choice than one born out of necessity.

It would certainly be interesting to see what modern CGI could do with both the monster, and the stony fate which she causes to her victims. For the latter is little if any more convincing than the creature; people stagger away, to a location where they can conveniently be found, looking all grey. That’s about it, until we cut to the plaster of Paris corpses, which may or may not look very much like their living counterparts. It’s also an odd decision to have the Gorgon played by a different actress entirely: Prudence Hyman had been a ballerina until she married an executive at Rolls Royce after the war, and it would have been nice to have put that talent for movement to some use.

Despite frequent references to Greek mythology, it diverts dramatically from that, by making her only adopt that form at the time of the full moon, as if she were some kind of werewolf. That’s something entirely invented by Hammer, apparently allowing them to create a more tragic creature. This way, she can deny all knowledge of the deaths she causes in Gorgon form, since she doesn’t remember them. At this point, the idea of a female leading monster was novel enough for the studio – it being the first such film by Hammer – without needing to give her full agency as well. Let’s not give the little ladies ideas above their station, shall we? 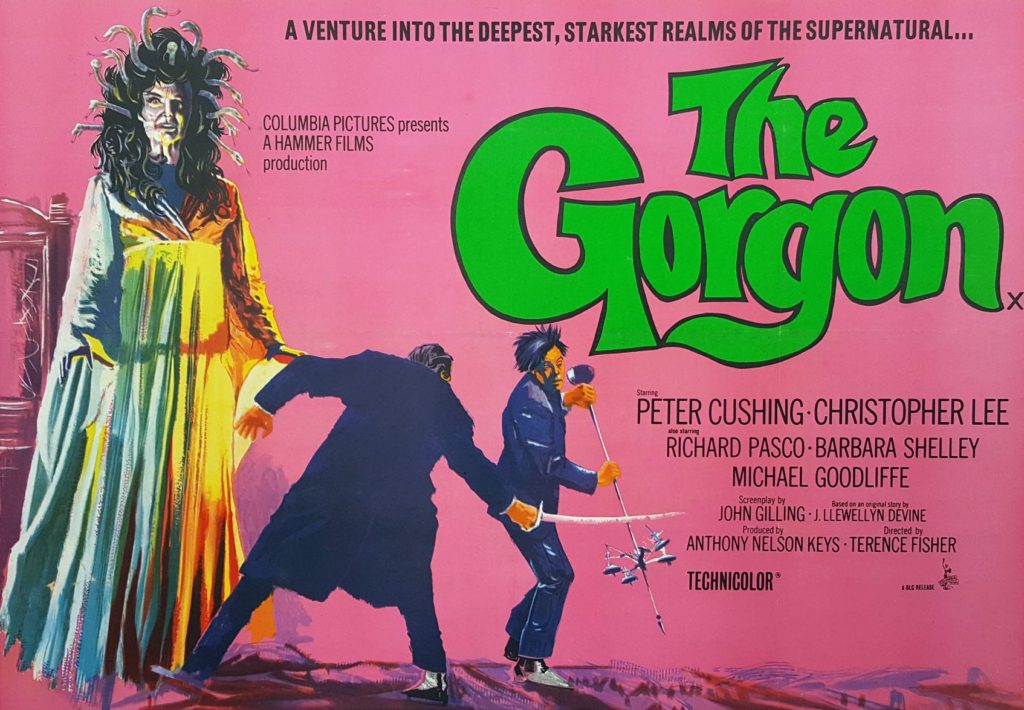 This was the first time since The Mummy in 1959 that Lee and Cushing had appeared in the same film for the studio, though as noted, they are almost entirely kept separate. It is interesting to see Lee take on the role of the hero, and Cushing playing the bad guy. Though, as was often the case in the latter’s filmography, it is still a fairly nuanced character, whose interests are driven as much by wanting to protect Carla, as for any selfish reasons. By the end, even Dr. Namaroff has realized the Gorgon must be destroyed, and heads up to its lair with a large sword, leading to a rather questionable fight against Paul, in which the latter wields a giant candlestick, before Prof Meinster swoops in for an enthusiastic coup de grace, Lee apparently thinking he’s still in The Devil-Ship Pirates.

In a final analysis, this turns out to be more of a mystery than much of a horror. It’s a whodunnit, whose main novelty is the method of murder – and not a very good one, with the killer obvious to the audience, even as most of the cast look in the other direction. There is something to be said for the shifts in focus over the course of proceedings, which help keep the viewer on their toes. However, it is not a film which has aged well, and if you can avoid derisive snorts at the end, you’re a considerably more restrained viewer than I.