This Spanish “locked room” mystery starts with the arrival to see her client of Virginia Goodman (Wagener), a newly-engaged witness preparation expert. The customer is Adrián Doria (Casas), a tech entrepreneur who has been charged with the murder of his bit on the side, Laura (Lennie). He was discovered in hotel room with the corpse, locked from the inside, but swears he was knocked unconscious by an unknown assailant. As Virginia questions him, we learn about an incident in the past, where he and Laura accidentally killed a young man, but covered it up to avoid exposing their affair. Is this connected to Laura’s death, with someone seeking to kill her and frame Adrián as revenge? Or is it as simple as that? 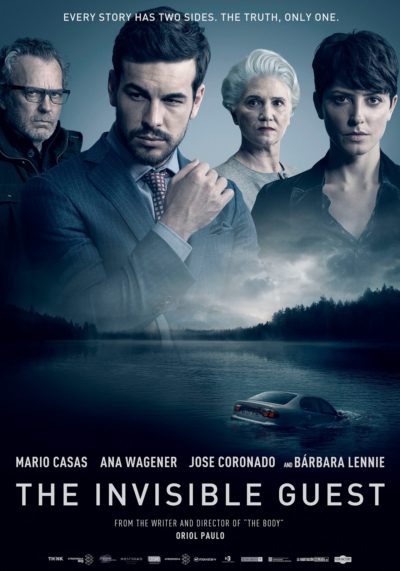 Let the record show that Chris guessed the final outcome remarkably quickly, almost as soon as the accident was revealed. However, the film then managed to make her un-guess it, by introducing information which made it seem impossible. But in the end, she turned out to be right. It’s not a cheat; indeed there’s one casual line from the young man’s father (Coronado), which sets it up very nicely. Must say though: I have… questions. While detailing these would be a massive spoiler, they concern how the perpetrator came about certain pieces of information. And since this is the kind of Sherlock Holmesian story which needs to be absolutely bulletproof, that’s a flaw, and potentially a fatal one.

It’s why I wavered on the grade, changing it multiple times in the B- to C range. For I enjoyed this perfectly well as it was unfolding. The script surrenders its data at the right pace to sustain interest, and Wagener provides a cracking performance as a whip-smart legal eagle, who pounces on any inconsistencies in Adrian’s testimony, because that’s what the prosecution will do. If I were accused of murder – unjustly or otherwise – I’d definitely want her on my side. It was only thinking about the plot afterwards, that I found myself going, “Wait a minute…” How you rate this, may well depend on to what extent you care about such things. Does having a hangover the next morning, negate the previous night’s good time?

In the end, I decided to give the film the benefit of the doubt. It’s certainly possible what I perceived as flaws, were actually explained adequately during an earlier portion, and I just missed it. And even if there were genuine plot-holes, there’s still plenty to enjoy here, not least the characters. Adrián initially seems like a dick, cheating on his wife and young child. But as the film develops, it seems Laura is perhaps the driving force behind much of what happened. Though should Adrián be considered a reliable narrator of what happened? Your opinions will end up twisting like a used Slinky before the truth is revealed. Despite crap retitling (the original Spanish translates as “Setbacks”, a rather more subtle and appropriate name), I’d say this was worth the watch.