Plotwise, this plays like a SyFy original movie, and not a particularly imaginative one at that. Two princes of a mystical realm are sparring in a field, when a portal opens, sucking one of them off. Hmm. I should probably rephrase that. Anyway, the survivor, Mairok (Phillips) is tasked by his father, King Golan Mor (Jones) with recovering four stones which, when combined, form a magical suit of armour. This cannot be allowed to fail into the hands of the evil Shadow (Bertoli), who wants it for the usual evil purposes, e.g. to do evil. Off heads Mairok on his quest, with the help of Amazon queen and stone guardian Lantris (Mischiati), towards the inevitable final battle with Shadow. Will there be noble sacrifice from a supporting character? Will good triumph over evil? Will there be copious quantities of really spiky shoulder-pads? 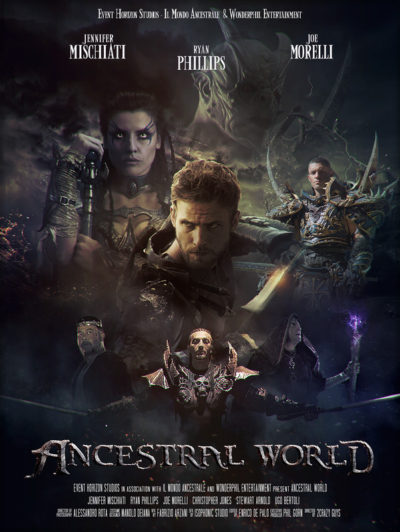 If you’ve seen enough of this kind of low-rent fantasy film – and, in this context, “enough” is likely any more than three – you will already know the answers to those questions. This story is nothing if not staggeringly predictable, playing out with all the creative effort of a remaindered Playstation game. The limited resources are also painfully apparent in the complete lack of any crowd scenes, which might help establish this as a living, breathing world. Outside of a heavily CGI’d opening battle sequence,  I don’t think we ever see more than four people at once – that would be Lantris and the three women who appear to comprise the entire population of her realm.

Directorial credit on-screen goes to “2 crazy guys”, although the IMDb lists only De Palo. He has a long career, going back to 2005, as a digital effects artist on the likes of Kingsman: The Secret Service, and this does likely help. Presuming the budget elsewhere was as low as the tiny cast implies, the results are solid enough, especially in the area of landscapes and backdrops. The makers also benefit from having apparently been given permission to use a slew of castles, ruins and other historic landmarks in Italy’s Piedmont and Valle d’Aosta regions. These provide the movie with much-needed production value, while promoting the area as an attractive destination for tourists. Just watch out for those pesky portals of suck.

None of the above is enough to save this, as it rumbles along at a low level of energy, with few scenes of note. The fight sequences are particularly underwhelming in this regard, being slow and unthreatening, of the “2-3-SWING, 2-3-BLOCK” variety. The lead actor looks heroic enough, yet recites his lines with no more than the same sense of duty Prince Mairok went on his mission. Lantris fares slightly better, even if it looks like she came to set straight from her shift at a Kiss-themed restaurant. Her shoulder-pads, however, should have a long and successful career in front of them, and I look forward to seeing what they might do in future.