This week in “Recommended for you on Amazon Prime”. For The VelociPastor begat Post Apocalyptic Commando Shark, which begat Killer Sofa, which begat this. I may never get to see another good movie on that streaming platform ever again. But how could we possibly resist this synopsis? “Duke, a carousel unicorn, hates his job. He has to let kids climb on his back and ride him for hours every day. But one kid has finally pushed him too far. Duke breaks free of his carnival hell and embarks on a bloody rampage of revenge on humanity.” And, I have to say, that’s an accurate summary of what goes on here. I will qualify that: the creature on the poster below, is considerably more impressive than the one in the film, as shown top. Though, you know what? It’s probably for the best, and in keeping with the generally low production values. 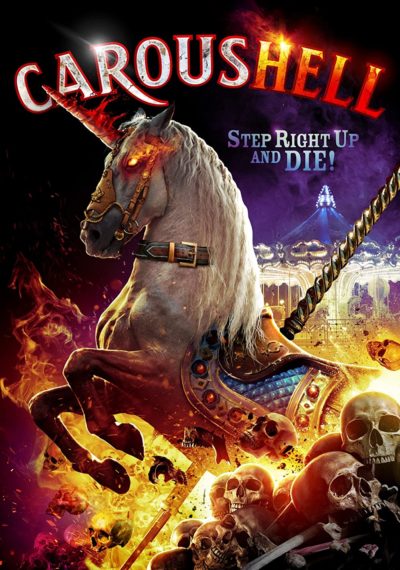 The plot likely deserves a little more explanation. Laurie (Marie) gets lumbered by her stripper mom with taking care of her little brother (Shaw) for the day. She has a party that night, but before heading to it, takes him to the funfair. There, his ill-treatment of carousel unicorn Duke (voiced by Rimpici, doing a sterling Patton Oswalt impression) proves to be the breaking point. For reasons that are never satisfactorily explained, it breaks free, following Laurie and her sibling to the party. The guests are remarkably chill when Duke shows up; indeed, there’s one with a unicorn fetish which leads to… Well, let’s just say, they missed a chance to have Duke lying on the bed, with a post-coital cigarette dangling from his mouth. However, it’s not long before the unicorn gets back on task, and only funfair mascot Cowboy Cool (Gaynard, looking like Frank Sidebottom in a Stetson) can end his reign of terror.

This is at its best when its at its silliest, such as the wielding by Duke of a range of weapons, including an ax, bow and even ninja death starts. All of these show impressive application, considering he has hooves rather than opposable thumbs. There’s also a plethora of references to the “My Tiny Uni” show, which is a favourite of our unicorn fetishist, though her boyfriend is mortifed to be “outed” as a fan of the show. I was also amused by the long-suffering pizza delivery guy, who is just desperate to get paid, and is oblivious to everything else, including Laurie’s seduction attempts. However, it would be fair to say that you’re here for the killer unicorn, and he all but vanishes in the middle. With a brisk 66-minute running time, I was hoping for it to be all killer and no filler, so was a bit disappointed by the party chit-chat, even though some of it was entertaining enough. Still, of all the ridiculous films Amazon Prime has “recommended”, this was likely the one we enjoyed most. Bring on Killer Piñata…