According to Google, the definition of a sofa is, “a long upholstered seat with a back and arms, for two or more people.”  The murderous piece of furniture in this show is clearly not a sofa, being only capable of accommodating one person. A more accurate title would be Killer Armchair, or Killer Recliner. This kind of titular misrepresentation is entirely unacceptable, and I would like a refund. What? I didn’t pay for this? Free with Amazon Prime, you say? Our son’s account? Well, never mind then. Please carry on. [In the film’s defense, it was also originally called My Lover, My Lazy Boy. I would not be surprised to hear a cease-and-desist letter from a certain furniture manufacturer was involved in the change…] 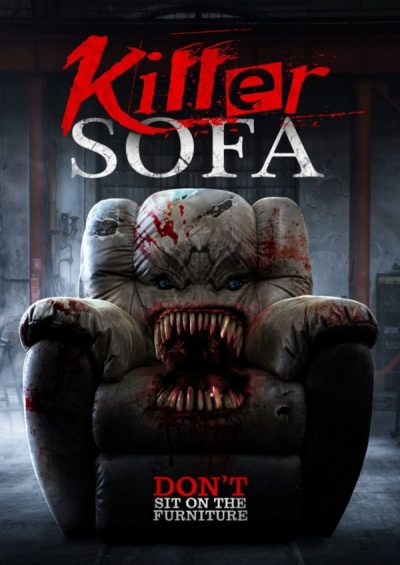 This is a great concept, and the sofa itself is quite glorious. There should be an Oscar for its performance: probably in the “Best Back-Supporting Actor” category, hohoho. With the simple use of things like buttons and creases, the makers manage to turn it into a genuine personality, even if it’s doing no more than sitting in a living room, looking ominous. And when it starts stalking people, using its springs as lethal weapons… We enter an entirely new level of wonderful loopiness, which I don’t think I’ve seen since The Mangler, the film based on a Stephen King story about a possessed washing machine.

The problem is everything else. The rest of the cast are blandly forgettable, and the plot doesn’t make sense. Yes, I went there. A film about a psychotic not-a-sofa “doesn’t make sense.” Because it comes up with a rational explanation at the end for its depradations, and frankly, they would have been far better off sticking with demonic possession or whatever. I just wish they’d gone with the simpler story outlined in the IMDb synopsis: A killer reclining chair becomes enchanted by a girl and starts committing crimes of passion. That has an almost poignant feel to it.

Instead, there is a back-story about a pair of husband-and-wife witches who poisoned people with oleander tea, from one of whom the heroine, Francesca (Mei) is descended, causing her to become a perpetual psycho magnet when it comes to boyfriends. One of them, Frederico Olson, has just turned up dead. Well, his feet have – unattached to the rest of his body. Which is why the police, led by Inspector Bob Gravy (Brophy) are looking into the case. There’s also a defrocked Rabbi (Baltaxe), or whatever the Jew-appropriate term is, who gains occult knowledge through YouTube videos, and is convinced this is an entity called a “Dybbuk”. This is actually a thing in Jewish folklore.

Yeah, they shouldn’t have bothered. Just give us scenes of well-upholstered slaughter and that’s all we need. Anything else just gets in the way – let’s face it, no-one is ever going to watch a film with this title for the performances, so they shouldn’t have bothered. Sadly, I have to put away my intended pull-quote, and instead will be going with, “Sofa, not so good”…