Phantom of the Opera is among my favourite musicals of all-time. Likely top three material, for its combination of hummable tunes and impeccable emotional manipulation. This ill-conceived sequel? Not so much. Indeed, if you had set out, deliberately, to make something that avoided all of the strengths of Phantom, you’d end up with something close to this. There’s good reason why, on its London opening, reviews were largely savage, most notably one critic who called it Paint Never Dries. Admittedly, it was significantly revamped, and indeed, parts even rewritten, by the time it got to its Australian run, captured in a Melbourne theatre for this film. But it’s still not good. Mind you, I’m unsure what you’d expect from a romantic musical whose multiple writers include men most famous for working on Blackadder (Ben Elton) and Day of the Jackal (Frederick Forsyth). 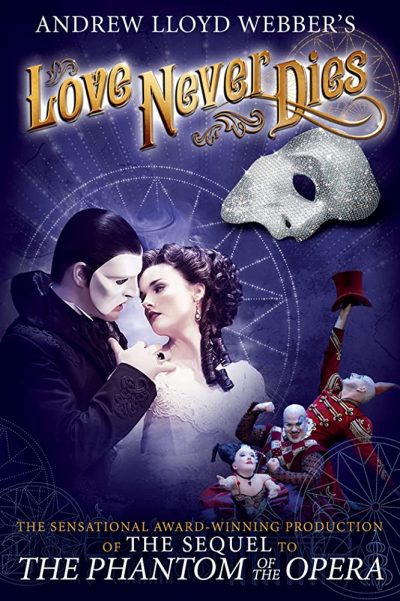 Its biggest crime is rewriting everything from its predecessor. [I guess spoilers follow] The original finished with the Phantom letting the love of his life, Christine, go to be with the man for whom she truly feels, Raoul. This was a touching act of ultimate self-sacrifice, despite the pain it caused him. In this sequel, set a decade later, the Phantom (Lewis) follows Christine (O’Byrne), Raoul (Gleeson) and their 10-year-old son Gustave, as they go to New York, where she will perform for Oscar Hammerstein at Coney Island. Yes, he never actually gave up on Christine and has become a stalker, sneaking into the US behind her. This, folks, is why we need strong border security: the Paris catacombs aren’t sending their best… Raoul has also turned out to be a real dick with a bad gambling habit. But a worse aspect still can perhaps be worked out from the above. Specifically, “A decade later… their 10-year-old son”.

Yep, turns out Gustave is the Phantom’s sprog. Rather the courtly love affair of the original, inspired by a shared appreciation of music, the inescapable implication is that he and Christine made the beast with two backs. The disturbing implications of this prove thoroughly distracting. Did he keep his mask on during sex? Or was it doggie-style? I bet it was doggie-style. But again, in Phantom he explicitly sang, “This fate which condemns me to wallow in blood, has also denied me the joys of the flesh.” Apparently not quite the incel he claimed to be. Anyway, here Christine is basically robbed of all agency, instead becoming the stake in a bet between the Phantom and Raoul. This does give us the film’s sole memorable song, Devil Take the Hindmost. The only other moments to generate any frisson are when you recognize a call-back to Phantom. Though there’s one such bit we’re sure Lloyd-Webber nicked from The Nightmare Before Christmas.

I have to say, some of the staging is pretty impressive. It’s certainly a very busy musical, with a lot going on to engage the eyes. But it was probably a sign that while this was being composed, Lloyd-Webber’s cat Otto, “got into the grand piano, jumped onto the computer and destroyed the entire score for the new Phantom in one fell swoop.” A valiant effort, Otto.

Still a better love story than Twilight though.