This begins with an extended prologue detailing a war between mankind, in the form of ‘Section One’, and the aswang, vampiric-like creatures. The leader of Section One discovered that injecting aswang blood conferred benefits in terms of strength, speed and healing ability… but at the cost of eventually losing your humanity. The resulting hybrids are now being fought by the Slayers, a group under the tutelage of Master Ishida (Ignacio). Gabrielle (Chang) joins up with them, seeking revenge after her husband and son are killed by hybrids. This is just in time for a mission to take down hybrid leaders Naga and Gundra. But to do so requires the Slayers to team up with Bolo (Soberano), a renegade with… well, let’s leave it at “issues.” And he might not be the only one, either. 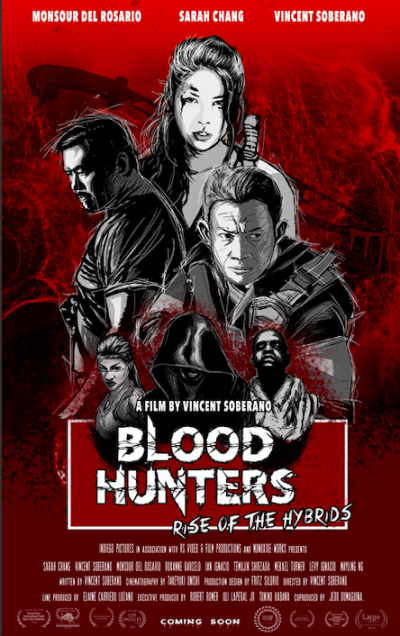 As you can perhaps figure out from the above, this is a very busy film, which has to keep up a frantic pace to cram everything in to its 72-minute running time. Not least because, once you get past the half-way point, it’s basically an extended fight sequence, so the plot, etc. are of necessity heavily front-loaded. In general, it plays a little bit like Blade, blurring the lines between us and the monsters. This is reflected in the frequent comic-book panel styling, though the feature actually came out of a short film from the same director. It’s all too much to cram in, with everyone apparently having a back-story and either a hidden agenda or a cause for revenge. Or perhaps both. As a result, none of the characters get significantly developed; they might have been better off reducing them in number, especially given the limited time available.

While most of the actors are decent enough, we did have issues making out their dialogue in some cases. Master Ishida is virtually incomprehensible, and there’s also one of the aswang who, I suspect, may have been given false teeth which didn’t fit him. His lines appear delivered through a grimace and are also close to inaudible. All told, this was definitely proving problematic and interest was beginning to wane as we reached the half-way point. Fortunately, that’s when things perk up, and as mentioned above, the film barely pauses for breath over the final 35 minutes.

Taken to be a show-reel for the stunt and screen-fighting skills of everyone involved, it’s undeniably impressive, with a range of battles involving weapons, bare hands and more crashing through furniture than a good weekend at Ikea (I’m not allowed in there any more). I particularly like a neat visual effect where the aswang appear blurred, nicely illustrating their other worldly nature. But mostly. it’s just brutal brawling, and is a lot of fun to watch. My only complaint is Soberano’s fondness for having two fights go on simultaneously, and cutting between them, which happens on at least three occasions. I’d far rather just stick with one to its natural end, then move to the next. Otherwise though, he and his cast demonstrate their potential, and the cliffhanger ending suggests more to come. If the next installment ends up being just 70 minutes of mayhem, I’d not complain.

Blood Hunters: Rise of the Hybrids is out now on various streaming platforms, including Amazon.