While not living up to the standard of silliness set by The VelociPastor, I think it’s probably fair to say that this was better than the travesty for which I was bracing myself going in. It had all the hallmarks of a comedy whose every funny moment was in the trailer, a one-joke entity where that singular element was spread like cheap margarine over its feature length. I’m pleased to report that isn’t the case. It is still, of course, severely hamstrung by its lack of resources – as shown above, the supposed super-soldiers look more like someone left a plastic shark’s head too close to an open fire. And a film that’s deliberately crap is never going to be as iconic as a film which stumbles into crapness. But this was quite bearable. Albeit with the aid of six miniatures of alcohol. 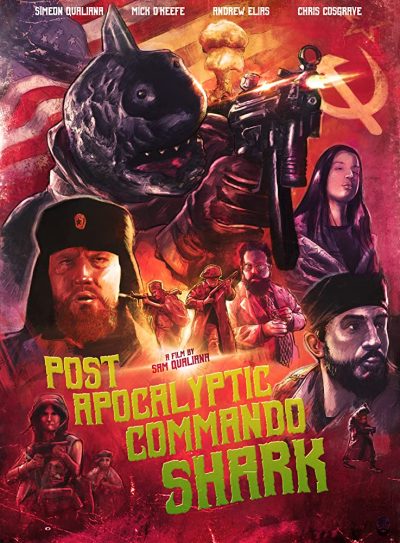 It’s as much a parody of movies like Red Dawn as anything, with square-jawed and two-fisted American heroes going up against those evil Russkies and their plot to take over America. What it isn’t, it very post-apocalyptic. Or, if it is, the world has bounced back very nicely and looks… exactly like it does now. [There’s certainly no shortage of forest, which is where this largely takes place.] After a nuclear exchange of stock footage, the Russians have invaded the United States, and are trying to mop up the remaining brave Americans, fighting a guerilla war against the Soviets.

To suppress the insurgents, Russia, with the aid of a renegade German scientist, has concocted a dastardly mix of human and shark DNA, into the titular warriors. They are capable of killing you both with their bite, or with their automatic weapons, and could turn the tide of the war. Not least because American efforts to make something similar, have so far only managed to create a talking dog, which is more interested in finding its ball than fighting for liberty.

I think it’s probably politest to describe most of the performances here as “enthusiastic.” Few would merit a callback from the local am-dram group. On that basis, the brief presence of Debbie Rochon may be a mistake, as her genuine performance more or less highlights the woeful inadequacies of almost everyone else. Yet, I can’t say these were inappropriate, and at least they erred on the over side of acting, which is certainly the way you want to go in something like this.

The most charming aspect is probably towards the end, where the Russian unleash their doomsday dev… er, doomsday creature, the city-killing GargantuaShark shown below. It’s depicted in primitive stop-motion and rear projection which is rather endearing, and comes over as charming rather than feeble. I’d like to have seem them have do more with this monster, but can see why the work involved would have been more than the makers wanted to take on. As an entity, this has its share of misses, yet it’s far from the worst shark flick I’ve seen. 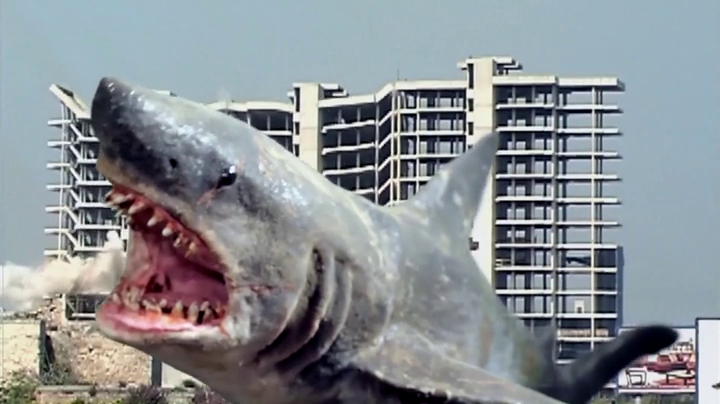