Advance warning: the film takes a sharp twist after about half an hour. I don’t want to spoiler this, so this is probably going to be one of my vaguer reviews. It starts off looking like it’s going to be a fairly generic “babysitter in peril” film, with perky 17-year-old Ashley (DeJonge) taking care of horny 12-year-old Luke (Miller), while his parents are out for the night. Things are complicated by the crush which Luke has on Ashley, and he’s unimpressed by her having an actual boyfriend. However, all such thoughts go to one side when signs, starting with the arrival of an unordered pizza, begin to indicate they are the targets for a home invasion. 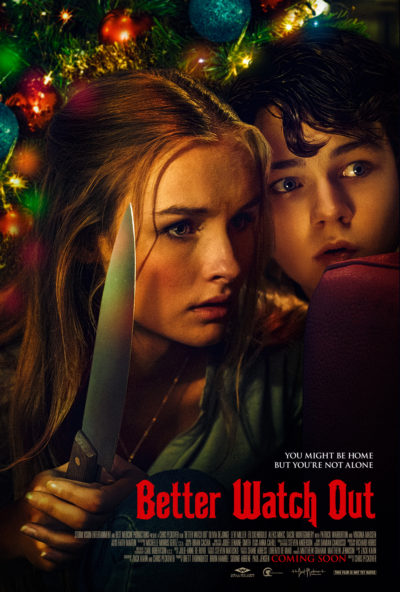 So far, so relatively standard. Then there’s the twist – technically, a double-twist. The first part, I must admit, didn’t come as much as a surprise. But just when I was wondering where the film could possibly go for the remaining hour, the second part kicks in. I did not see that coming. However, the problem is, once the surprise has worn off, the film largely goes back into “babysitter in peril” mode. Things are somewhat complicated by the arrival at various points of Luke’s pal Garrett (Oxenbould) the aforementioned boyfriend, Ricky (Mikic), and an ex of Ashley’s as well. But only somewhat, and the film continues mostly to focus on Ashley and Luke, and their respective issues.

As the title and poster imply, this is set at Christmas, though in terms of direct relevance, it’s hard to see why. The main point seems to be to allow the recreation of the paint-can stunt from Home Alone, which has considerably more… impact on the subject here, than when staged by Macaulay Culkin. But this is hardly a movie which is predicated on gritty realism. That much is clear from the moment lightly-built Luke is able to stop Ashley from falling out of the attic, in apparent defiance of physics. There are occasional other resonances with the holiday classic, which also pitted a minor against a threat, in their home. However, it’s probably the sort of thing which should either be embraced entirely, or not at all; this feels a bit half-assed.

I was surprised to discover this is, at least technically, Australian, since there are no references to kangaroos, Vegemite or pommie bastards. Turns out, it was going to be shot in South Carolina, when an Australian producer swept in with an increased budget. Is it a good thing, for a local film industry to be making generic product, easily mistaken for low-budget Hollywood? I guess it’s better than not making product at all. Yet, outside of the five minutes where the twists kick in, there’s not enough here, in content or execution, to make it stand out. While competently made, to be sure, there’s nothing memorable and it seems destined to be forgotten, in a crowded field of BiP films.