There is one scene here which justifies the film’s existence. And, yes, it is the one pictured above, thank you for asking. In it, heroine Lara (Blake) is enthusiastically losing her virginity, that being the only way to stop her from becoming the “Chosen One” of a group of satanic cultists. They are  currently besieging the titular bus, stranded somwhere in the middle of the Nevada desert. Meanwhile the other passengers are trying to retrieve the ignition key, which the driver – one of the cult – swallowed before her death. Hence, the torrents of gore descending on Lara as she engages in luggage compartment aardvarking. And the cultists outside are having a blood orgy. Oh, and turns out that having sex makes Lara become a flesh-rending demon. 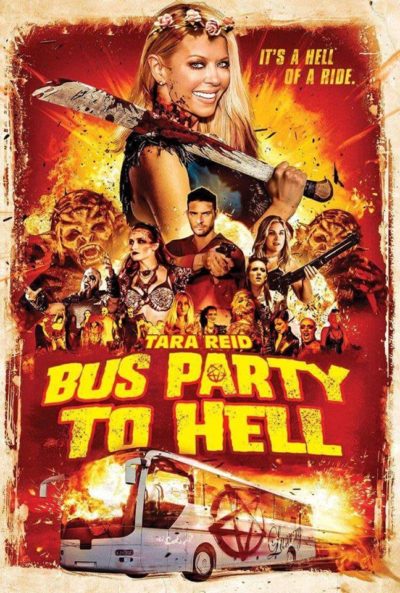 There is a moderate amount of stuff that happens leading up to this. And a non-zero amount afterward. However, none of it remotely lives up to the scene described above. I suspect this idea came first to writer-director Kanefsky, and everything else was just a means to that end. Such as, for example, the presence of Tara Reid, whose contribution is in no way proportionate to her presence on the poster. She collects her cheque just after the 12-minute mark, to be precise. However, since the rest of the cast are a collection of no-names, save for the driver, who was apparently in one of the Wrong Turn movies, the focus on her is to be expected.

This is an all-you-can-eat buffet of influences, most obviously Race With the Devil and From Dusk Till Dawn. I guess there are worse films to take influence from. Though in most ways, this falls a long way short, not least in resources which extend basically to a) a bus, b) a desert, and c) corn syrup and red food colouring. However, once things get going – and, I admit, it does take some time to get there – Kanefsky largely doesn’t quit. As long as you’re happy with tits ‘n’ gore, this film keeps on delivering. Admittedly, the breasts are occasionally forced to make up for in quantity, what they lack in quality. You can say the same about many of the effects, actually.

But, I will say this, I was never bored. A film with Tara Reid and a title like this – even if it can’t decide whether it’s a bus party or a party bus (a significant difference to British readers) – comes with a certain set of expectations. If you think you’re going to get anything else apart from exploitation of the basest kind, you really need to check yourself before you wreck yourself, especially when the lurid sleeve only enhances these preconceptions. I can safely say they were, by and large, met across the board, and in some departments e.g. That Scene, significantly surpassed. If this is the apocalypse prophesied in Revelations, where do I sign up?