The start of this is absolutely stunning. Probably the best opening to any zombie film, with the possible exception of the Dawn of the Dead remake. We go from zero to zombie apocalypse in about two minutes, leaving the central character, Joon-wo (Yoo) trapped in the family apartment. He’s sorely unprepared for the situation, having been caught entire unaware since he spends all his free time playing games online with his pals. A lesson for us all there, though I must admit, it’s an angle I kept expecting was going to come back and show relevance later on. It doesn’t. These zeds are voracious and appear to have heightened hearing, so he can barely move without attracting unwanted attention. Just when all hope seems lost, he sees another survivor, Yoo-bin (Park) in the apartment block opposite his. Communications are established, though their situation remains highly precarious, and they’ll need to figure out a plan for long-term survival. 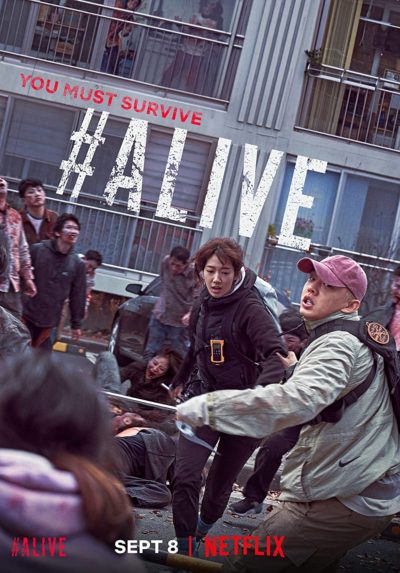 The first half is told largely without dialogue, which offers an interesting twist on the usual approach, keeping what is a fairly generic story-line fresh. Joon-wo does post some online videos – complete with reflexive vlogger request for viewers to subscribe – and there’s a particularly harrowing text message, revealing the fate of the rest of his family. However, it otherwise unfolds mostly in visuals, which may help explain why it did so well on Netflix – foreign-language films like this rarely crack the top 10 on the platform, save for the occasional Spanish entity. The concept of being trapped in your home has a particular resonance at the present time; as I write, it has been 55 days since I have gone past the end of our driveway [though I’m going to the supermarket this afternoon, and have never been so excited to do so!]

Once the hero and heroine team up, things do become somewhat more standard. We get the usual tropes about the zombies not being the biggest threat, etc. and the movie reverts to a more formulaic approach, using dialogue to progress the story. However, by this point you are well-enough invested in both characters; you’ve bonded with them, as they have with each other, over everyday things like the best way to cook instant ramen. The film can therefore afford to coast somewhat towards its roof-top climax, where Joon-wo and Yoo-bin finally run out of places to hide.

Helping matters, the zombies here look particularly malevolent, with a chilling mix of prosthetics, enhanced by CGI. Though traditional fans will shake their heads at the velocity they achieve: they’re not exactly shuffling around. It’s interesting that she is likely better equipped for survival than he, though what Joon-wo lacks in skill, he largely makes up for in sheer guts. When the going gets tough, the tough hold back an army of the undead using a bicycle, or so it appears. While we wait for the Train to Busan sequel, Peninsula, this will do very nicely as a Korean zombie place-holder.