The success of The Pirates of Blood River led Hammer to make another foray into the swashbuckling seas. Once again, Lee was called upon to play the pirate leader – this time Spanish, rather than French. And unlike Pirates, this time they do have an actual boat, even if it does spend far more time in dock than at sea. Still, a good script, by Jimmy Sangster, with an inventive central idea, helps make this a solid success. Though as with its predecessor, the lack of a decent heroic foil to play against Lee, stops this from ascending to the top tier of Hammer productions.

It takes place in the late sixteenth century, immediately after the defeat of the Spanish Armada by the forces of Queen Elizabeth I. The Diablo, under the command of Captain Robeles (Lee), is a pirate ship which had signed up to become part of the Spanish fleet. But they’re now more interested in returning to the West Indies and resuming their former trade. It’s a decision which does not sit well with the King’s representative on board, Don Manuel Rodriguez de Savilla (Warren). However, before the Diablo can go anywhere, it’s in desperate need of repairs. Robeles takes the risky choice to land on the coast of England and press-gang the locals into helping, hoping to get back out to sea before any military forces can get to them. 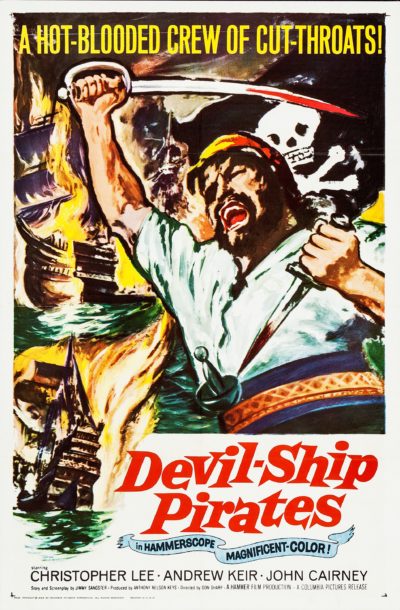 The first scouting party gets captured, but de Savilla manages to convince the residents of the isolated village that he is the advance guard of a victorious Spanish force. The local lord of the manor, for one, welcomes his new Hispanic overlords, much to the disgust of some locals. Robeles seals off the town from the outside world, to make sure the truth isn’t discovered. But that does not stop a resistance movement from forming, led by Harry (Cairney). Intent on sinking the invaders’ plan, they get help from an unexpected ally. De Savilla is less than excited at the prospect of going to the Caribbean, rather than returning to Spain, and has frankly had it with the refusal of Robeles and his crew to accept his authority. It all makes for an interesting plot dynamic, as you have Englishmen on the side of the Spaniards, and Spaniards on the side of the Englishmen.

This opens in spectacular style with a large-scale sea battle. I was expecting this to have been recycled stock footage, but sources indicate it was miniature work by Les Bowie. If so (and I’m still doubtful), all I can say is, well done, because it’s a very impressive piece of work. However, it does set unrealistic expectations. There’s nothing else like it the rest of the way, though the fiery finale, involving a full-size Diablo which cost $17,000, is larger scale than most Hammer movies managed. Apparently, the boat capsized at one point during shooting, and for the most British of reasons imaginable. Too many people on board went to the same side at once… in order to get a cup of tea.

Most of this does take place on land though, as Robeles tries to impose his will on the village. Initially, it seems that Tom, played by Andrew Keir, will be the protagonist, as leader of the anti-Spanish forces. However, he incurs the wrath of the Captain, and the task devolves onto his son, Harry. He’s not a memorable hero; indeed, I’d say Natasha Pyne, playing Harry’s sister, Jane, probably makes more of an impression. She’s the first to meet the Spaniards, is captured, but manages to escape. This is significant, because she knows the truth about the defeat of the Armada.

But this film belongs to Lee, who holds the audience’s attention every time he is on screen – remarkably, this was the first time he was top-billed in a Hammer film. His willingness to do whatever it takes is apparent from his very first scene, and that lends an edge to all the ones which follow. He’s smart enough to know when something is up, and takes six village girls hostage when the Diablo is ready to sail, to ensure there’s no funny business planned by the locals. Which, naturally, there is. 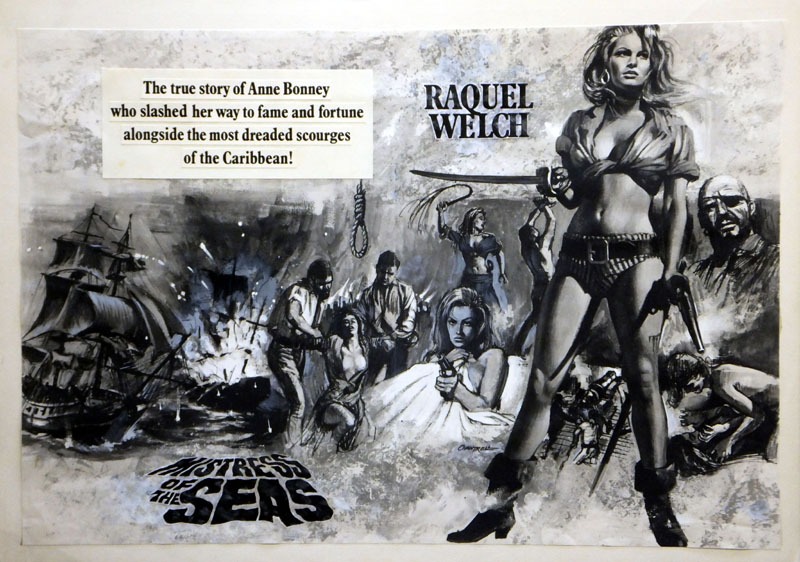 Action-wise, the scenario provide plenty of opportunities for sword-fight action. Lee takes centre stage there as well, building to his final confrontation with de Savilla, on the burning deck of the Diablo. There’s also a flogging and a hanging, and overall, I have to say, the “U” certificate seems to have been rather more easily awarded in the sixties – it’s now a “PG” in the UK. Overall, it’s a fun romp, sustained by good pacing. If it could have benefited from a heroic performance at its core, the supporting cast are good enough that you don’t particularly miss that. I think having seen Blood River probably set my expectations properly for this, helping me enjoy it more. As long as you’re not expecting to see ocean-going buckling of swashes – regardless of what the opening few minutes might suggest – it’s fine entertainment, and one of Lee’s best non-Dracula performances for Hammer.

I’m not sure how well this did; it was the last of Hammer’s pirate films, which suggests the box-officer returns were not as good as for Blood River. Though the studio weren’t completely done with the genre. In the seventies, they tried to get funding for Mistress of the Seas, based on the life of real-life female pirate, Anne Bonny. That was intended to star Raquel Welch, but sadly, never got further than the promotional artwork shown above. It seems a bit of a cursed project. In the eighties, Bo Derek was supposed to play Bonny, and a decade later, Paul Verhoeven tried and failed to make a movie based on her life – also called Mistress of the Seas – starring Geena Davis. Some things are just not meant to be, it appears…