This was originally intended to be a very different movie. John Trevelyan, then head of the BBFC, wrote in his autobiography. “This is the only film I can remember that started as an X film and went out as a U”. The reason for this change of direction was, the movie became scheduled as the partner on a double-bill with Mysterious Island, a kid-friendly flick featuring Ray Harryhausen stop-motion, due to be released during the school holidays. Pirates needed to match its certificate. You can’t argue with the commercial success: the resulting pairing was the most successful double-bill of the year in the UK, and one of the ten top box-office titles overall. But the result are very, very bland.

It doesn’t help that the studio attempted to bite of more than they could chew. This is most obvious in the fact that this is a pirate film with next to no nautical activity. There’s an opening shot of a ship at sea – presumably lifted from somewhere else – and an obvious matte painting of a film by a quay. That’s it. These are the most land-locked buccaneers of all-time. It presumably takes place somewhere in South America, going by the presence of piranhas necessary to the plot – though this didn’t stop the Nerdist review from claiming it was set on the Isle of Wight! That mistake is somewhat understandable, since the studio’s usual stomping grounds (including an oddly familiar gravel-pit) make for a poor facsimile of the Amazon jungle. 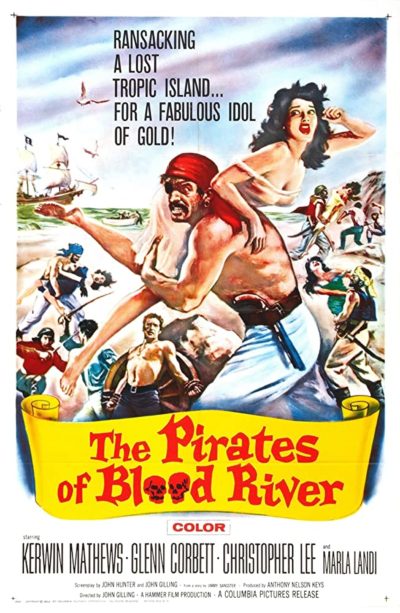 Proceedings open in a Huguenot settlement, where Jonathon Standing (Matthews) has just been caught having an affair with a married woman. Fleeing the scene, she becomes a victim to those pesky piranhas, and for his sins, Jonathon he is sent to a penal colony by the colony’s leader – who just happens to be our hero’s father. Jonathon escapes, and is captured by the crew of Capt. LaRoche (Lee, sporting a rough French accent for no apparent reason, since nobody else seems to bother). LaRoche hoodwinks Standing into taking him back to the colony, the pirate believing there is a hidden hoard of Huguenot treasure there. Getting the residents to turn it over, however, is one problem. Getting the loot out of the colony, through the treacherous swamps and rivers, and back to where the pirates can spend it, is another.

Bizarrely, there are parts of this in the second half, which felt like a primitive ancestor of those infamous collaborations between Werner Herzog and Klaus Kinski, such as Fitzacarraldo and Aguirre, Wrath of God. It has the “poor idea” of the former – in this case, dragging a gigantic golden artefact through the jungle – combined with relentless attacks on the party by the locals, from the latter. It’s just a shame we don’t get to see Christopher Lee gradually descend into madness as a result. That would have been sweet. Instead, as jungle adventures go,  it isn’t exactly pushing the boat out… not least because they don’t have a boat to push out, hohoho. Hammer should have called this “The Pirates Who Don’t Do Anything” and been done with it.  For the scurvy crew depicted here are much more bandits, and you can make a case this is closer to a Western, with a town under siege by outlaws, than any swash-buckler.

There are moments of interest. Probably my favourite was the blindfold sword-fight between two pirates – one played by Oliver Reed – enacted by Captain LaRoche as the way to settle their dispute over the affections of a woman  (top). It’s an interesting spectacle, and I couldn’t help thinking that blindfold fencing would be a great addition to the Olympics. Though based on this, some kind of plexiglass enclosure would appear to be needed, to ensure the safety of the spectators. For the bout here consists of alternating moments of strenuous listening and wild swinging, in just about any direction. Actually, most action here is of the rough and tumble variety. with swordplay that, while decent, relies more on strength than finesse. Good to see Lee in action, and I wonder if his special forces experience in WW2 came into play? [I’m reminded of him famously telling Peter Jackson on the Lord of the Rings set, “Have you any idea what kind of noise happens when somebody’s stabbed in the back? Because I do.”] 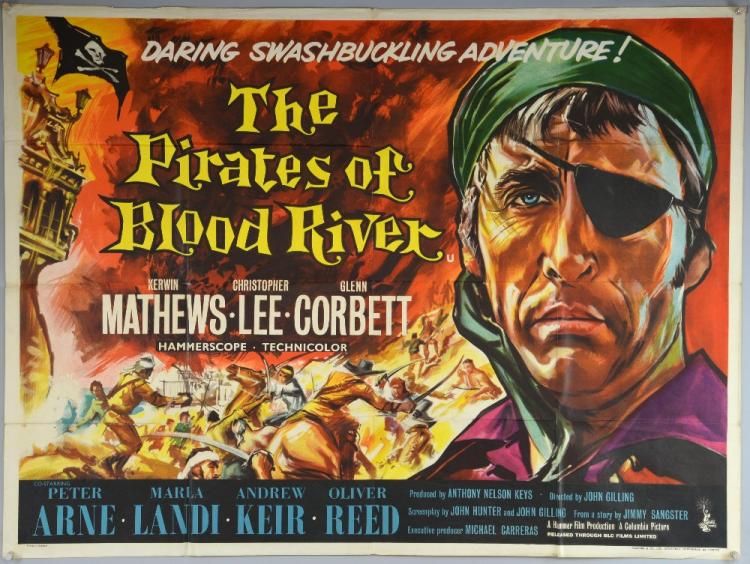 It’s perhaps worth discussing the trims needed in order for this to make its way down from an X certificate through an A, to a U. These mostly affected the piranha attacks, such as at the opening. According to Trevelyan, “In the X version a shoal of piranha fish rushed through the water and attacked the girl who struggled and was apparently dragged under the water which then became tinged with blood; in the A version the piranha fish rushed through the water but the scene stopped as they reached the girl; in the U version the piranha fish never appeared at all.” The Melonfarmers site says other cuts included “the blindfolded sword-fight, the attack on the farm, a shot of a hanged man’s legs, and the overdubbing of words such as harlot and adulterer.” Ironically, I note that when recently released on DVD in the UK, its rating was bumped back up to a “12” certificate, “for moderate violence [and] occasional bloody images.”

All told though, it didn’t feel like it had been hacked down. A much greater problem to me is the sheer blandness of Mathews in the lead. He was quite well-known, mostly for fantasy epics like The 7th Voyage of Sinbad, but even with the editing of this down to a U rating, this perhaps needed someone with a tougher edge, especially going up against Lee. As is, Mathews’s lack of charisma sucks the life out of almost any scene in which he takes part. Reed, with just a few minutes of screen-time. likely makes a greater impression that the film’s supposed star. Hampered by this black hole at its centre, it is certainly one of Hammer’s more forgettable non-horror features.