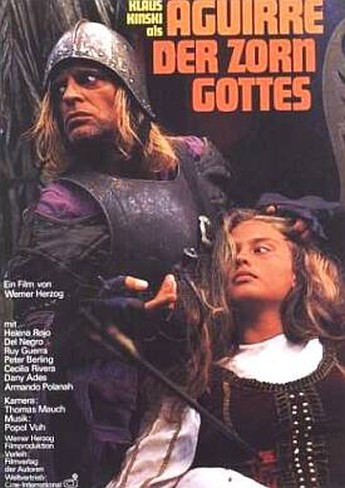 The relationship between Kinski and Herzog was truly a love-hate one: an irresistible force meeting an immovable object, with the results proving utterly remarkable. It’s amazing they didn’t kill each other: in his autobiography, Kinski called the director, “a miserable, spiteful, envious, stingy, stinking, money-hungry, malicious, sadistic, insidious, backstabbing, blackmailing, cowardly person, and a liar through and through.” But Herzog was one of the few directors to ever use Kinski more than once – and who can blame him, because their collaborations are perhaps the best work of either man. It was while chewing it over with Chris that I realised what the title means: Aguirre is God’s wrath on the conquistadors, dragging them relentlessly towards death and damnation, for their sins. It’s a brilliant performance from Kinski, who conveys the self-assured insanity of the title character with a single gaze. This is the cinematic equivalent of a really spectacular car crash: you know from early on how it’s going to end, but the incandescent self-destruction on view remains enthralling.

The landscape is stunning too, not least the opening sequence in which the Spanish forces descend a precipitous mountain pathway in the mist – into hell, if you will. More of the amazing Andes landscape would have been welcome, as the relatively flat river makes for a less effective backdrop, and I do have to say, the pace slackens a bit in the middle. Basically, any time Kinski is not on the screen, for he dominates the film in much the same way Rutger Hauer does The Hitcher. The party is slowly torn apart by their conditions, the local natives, and their internal strife, until all that’s left is Aguirre, ranting and raving at a raft of monkeys. He picks one up, stares at it, and tosses it contemptuously to one side, in what may be the finest acting moment of all-time. Truly, he is the wrath of God.