This is another one which I enjoyed more this time around than when I previously reviewed it (my original reaction is below). I can see how the amount of high-pitched shrieking in the early stages could have been off-putting, but we got into the swing of the second half, when the tables are turned and we seem to going for a reprise. I lost track of the number of “Mm-HMM” sounds which came out of our lips, as suspicious elements kept piling up, at some points every few seconds. And while the ending was still fairly abrupt, it was a satisfactory one, with the guilty receiving their just deserts, and a fairly happy ending. That’s not always the case in Hammer’s forays into the psychological thriller.

Still, I wonder how it might have been different. The first victim, Janet – probably a not-so-subtle nod to the star of Psycho by writer Jimmie Sangster – was originally supposed to be played by Julie Christie. However, she bailed at the last minute, wisely deciding to appear in John Schlesinger’s Billy Liar instead, which turned out to be her breakthrough role. [Ironically, Christie only got that part after original choice Topsy Jane dropped out] There’s also the glory of the shooting title, which I really wish they had held onto, instead of the far more generic name under which it was released. I mean, wouldn’t you want to go and see a film called Here’s the Knife Dear: Now Use It. 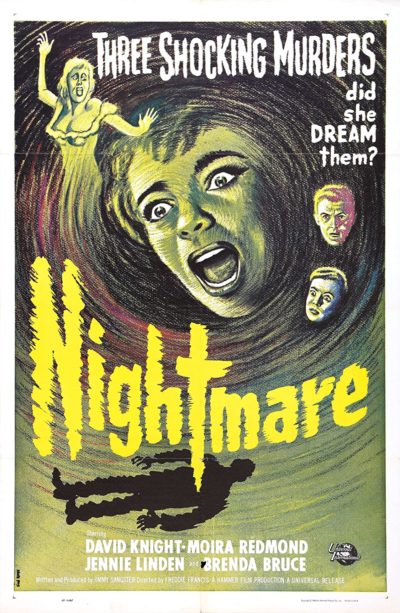 Linden, in her feature debut, is a bit of a problem. The following year, she’s be an assistant to Peter Cushing’s Doctor in Dr. Who and the Daleks. That role would probably put her talents in both “running” and “screaming” to better use than here, where she quickly gets grating. It’s something of a mercy when, at about the one-third point, she gets shipped off to the loony bin. The focus then switches completely – as I previously noted, this is another echo of Psycho, whose Janet also exited the picture unexpectedly – and improves significantly. The film then concentrates on Henry and Grace, the couple responsible for driving Janet mad, and their disintegrating relationship.

For she increasingly suspects him of cheating on her, hence all the “Mm-HMM”-ing we were doing, and as the evidence of his infidelity apparently mounts, their banter becomes more acidic. This peak, albeit perhaps more from a 2020 perspective that at the time, is when Grace snarls at her husband, “You might have been all kinds of a gay boy before, but you’re married to me now…” Matters are not helped by her discovery that Janet has escaped from her psychiatric incarceration, though this might be an opportunity disguised as a problem. Or, this being one of those twisty little plots, a problem disguised as an opportunity. I’ll say no more on the topic.

If you’ve seen its predecessors in the genre (and if you’ve been following this series, you’ll know I certainly have), there probably won’t be any real surprises here. For his plots, Sangster seems to be taking the same pieces, e.g. mentally fragile teenage girls, and arranging them in slightly different ways. However, Hammer was rarely especially innovative when it came to their storylines: if the audience kept coming to the table, why bother changing the recipe? This was released in the UK on a double-bill with The Evil of Frankenstein, and I think it would have worked very nicely in that role. I wish they still did that kind of thing: I sit here not three feet from a poster for the Tarantino/Rodriguez Grindhouse release, which may have been the last hurrah for the twin feature, outside of the drive-in. Mind you, in a post-COVID 19 world, I’m not sure I’ll ever return to the cinema again… 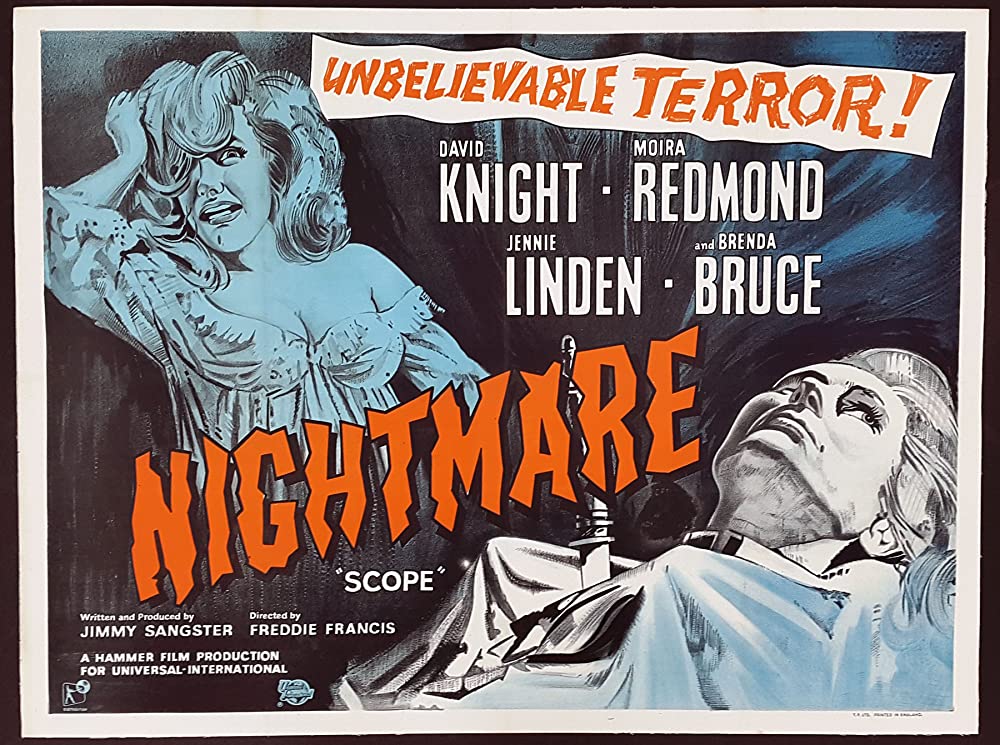 There are some things that aren’t actually much fun to watch on-screen, but it’s a lesson film-makers have difficulty learning. Taking drugs would be top of the list, but based on this one, “going mad” can surely not be far behind. Highly-strung teenager Janet (Linden) is sent home from school, as her nightmares are disturbing the other pupils. Turns out her mother went mad, stabbed her father and had to be locked up in a local asylum: Janet is concerned she inherited whatever caused the insanity. Things don’t get much better at home, despite the presence of nurse Grace Maddox (Redmond). Janet continues to see things, culminating in her fatally stabbing the wife of family lawyer Henry Baxter (Knight) at a birthday party – which results in the girl being consigned to the same asylum as her mother. However, it turns out this was all a plan by Baxter to get rid of his wife, so he can marry Grace. But when they move into the family home, Grace starts to suspect her new husband might have similar plans for her…

The main aspect of interest is the abrupt shift in focus in the middle of the film, clearly inspired by the similar change from Marion Crane to Norman Bates in Psycho, as the movie swings from Janet to Henry. It’s this middle section that contains most potential, with Francis pulling off the change with some aplomb. Unfortunately, the front and final portions are a good deal less interesting, Janet and Grace staggering around the house, looking disturbed and frequently shrieking at the top of their lungs – Chris was in the office, commenting afterwards, “What were you watching? There was an awful lot of screaming…” and it’s probably fair comment. The necessary plot-points are established with enough efficiency that by the time the third or fourth titular sequence comes into play, you have to suppress an urge to yell, “Enough, already!” at the screen. With all respect to Francis, Hitchcock he ain’t, and any efforts to prove otherwise, such as this, are doomed to fail. Rating: C