For a movie about a demonic entity which has to kill at midnight every day, this is surprisingly warm-hearted. But then, this is almost as much a love-letter to music as it is a horror movie. Punk band Duh’s first tour is in jeopardy when their van gets repossessed. Their only option is the very strange Uncle Peckerhead (Littleton, looking like Sid Haig’s younger brother), who agreed to be their roadie, despite the qualms of Duh’s driving force and bassist, Judy (Siegel). These doubts turn out to be entirely justified, for “Peck” turns into the monster from the first sentence. Fortunately, there’s no shortage of acceptable prey when he’s accompany a bottom of the barrel rock group, whether it’s shitty promoters, annoying metalheads or jealous rivals. However, Judy begins to have moral qualms, as Duh approach their biggest gig to date, opening for The Queef Queens. 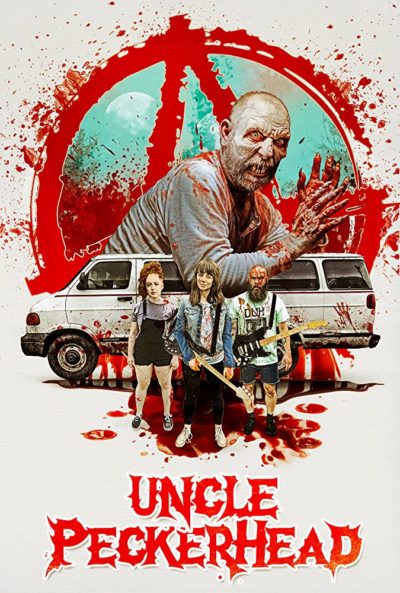 The problem may be that the comedy-horror balance is tilted too far towards the former. In fact, outside of a couple of splattery kills, there’s almost no darkness at all. Maybe it would have been better if Peck had been an actual serial killer, perhaps with a deranged desire to help the band achieve stardom. As is, the fantasy element removes almost all sense of threat – it’s also ridiculously lightly-sketched, with absolutely no information about how he became this entity. No-one has any real arc or development as a character either. Then there’s the stupidly contrived ending, which doesn’t so much beggar belief, as bugger it.

It works rather better as a portrait of life on the bottom rung of the music industry latter. We’ve been to our share of shit-shows. Truth be told, we’ve put on our fair share of them [the comedy event where one paying customer showed up, and that was the headliner’s sister]; the film nails the pitiful and desperately needy elements perfectly, as well as the overblown arrogance of some performers [literally no-one turned up to see you. Tell me again why you should get paid]. Judy’s unrelenting drive, in the face of fate’s equally committed refusal to co-operate, is certainly touching, even if Duh’s music is utterly forgettable – it really needs either to be kick-ass, or completely terrible.

There’s more than an echo of Deathgasm in the way this mixes rock music and horror, though that was considerably more committed to the latter. Peckerhead seems almost aiming to be a period piece – the demos Duh (try to) sell at their shows come on cassette tapes, complete with cover art by “local artist Marshmallow Dicks”. About whom no-one gives a damn, least of all the disinterested punter Judy is pitching, More of this kind of self-aware deprecation would have been welcome, and it works best as an entry-level version of Spinal Tap. Otherwise, it probably needs more bite to succeed. Which, considering the amount of literal biting, clawing and general rending of flesh this contains, feels a somewhat odd conclusion to reach.